LG Energy upon IPO to up economies of scale by expanding JV partners, capacity 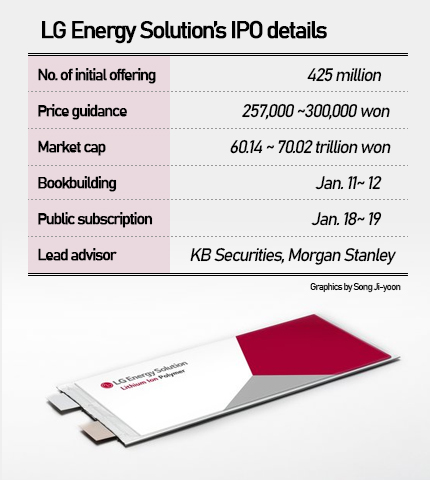 이미지 확대
LG Energy Solution Ltd., the No. 2 power behind global EVs, will build up economies of scale through Korea’s largest-ever IPO of near $11 billion to overtake China’s CATL.

“LG Energy Solution will take the first step to prepare for its next 100 years with an initial public offering,” LG Energy Solution Chief Executive Officer Kwon Young-soo said in a news conference on Monday ahead of the company’s two-day bookbuilding session. Pricing is announced on Friday.

Of the proceeds, the company will devote 8.8 trillion won to expand global facilities and build another joint-venture factory with a finished carmaker with an aim to command more than 400 gigawatt-hour (GWh) capacity by 2025. LG Energy is discussing a third JV cell factory in Michigan with General Motors in addition to plants under construction in Ohio and Tennessee. It is building a JV factory in Indonesia with Hyundai Motor. It plans to boost capacity at its standalone factories in Korea, U.S., China, and Europe.

The company under JV engagement with General Motors, Hyundai Motors and Stellantis will be able to announce a new car partner, Kwon said.

LG also has embarked on a business with a Chinese carmaker this year, he said, without specifying details.

Kwon projected the company’s battery orders to grow at least 25 percent from current backlog of 260 trillion won through the increased capacity. The company also aims to achieve a double-digit operating margin by reducing material and other cost.

“With 5.3 trillion won R&D investment over 10 years, the company has secured some 23,000 intellectual property rights in key battery technology to lead ahead of rivals,” said Kwon. The company is currently working on developing solid-state batteries with a goal for commercial production by 2026. It targets to enter the related market in 2030.