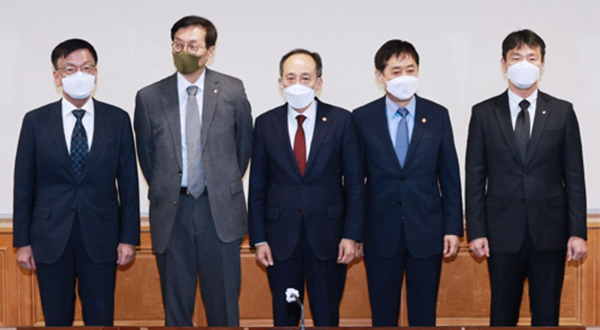 South Korean authorities are packaging another round of 5 trillion won ($3.74 billion) bond purchase program joined by the Bank of Korea after the first batch of 3 trillion won fund amid lingering jitters over liquidity crisis ahead of the year-end maturity of commercial papers worth $15 billion collateralized by property projects under construction.

The additional stabilization measure was discussed at the emergency macroeconomic finance meeting on Monday, headed by Minister of Economy and Finance Choo Kyung-ho and attended by government officials and others from the Bank of Korea and the Presidential Office.

Of the additional fund, 2.5 trillion won will be injected into financial institutions in the form of repurchase agreement (repo) with the BOK. State lender Korea Development Bank (KDB) and other large brokerage houses will put up another 1.8 trillion won to the bond stabilization fund.

The relief funds however may not be enough to quench fears about insolvency in 20.29 trillion won worth asset-backed commercial papers due payment by the year-end.

“The liquidity will be immediately absorbed through open market operation such as repos and does not conflict with the bank’s monetary tightening stance,” said Rhee Chang-yong, governor of BOK.

BOK’s latest decision is separate from earlier plan to operate 6 trillion won in repos with brokerage houses and investment banks grappling with liquidity shortage from panic over project financing due to property market slump and rapid rises in interest rates following the default declare on a municipal debt backing Legoland Korea project.