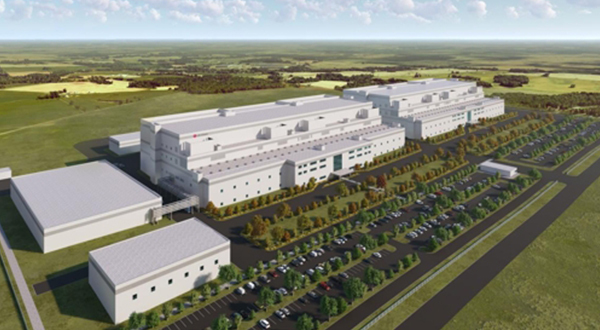 LG Chem Ltd., parent of South Korea’s top lithium-ion battery maker LG Energy Solution Ltd., will invest $3 billion to build what would be the largest cathode materials factory in the United States with an annual capacity of 120,000 tons in Tennessee to ensure its battery clients comply with the new conditions of Inflation Reduction Act (IRA) requiring sourcing behind electric vehicles come from North American turf for tax credits.

LG Chem signed a memorandum of understanding with the state of Tennessee for the building with an investment of more than $3 billion on Tuesday (local time) in Clarksville, Tennessee. The signing ceremony was attended by LG Chem CEO Shin Hak-cheol, Tennessee Governor Bill Lee and Department of Economic and Community Development Commissioner Stuart McWhorter.

Under the partnership, the Korean company will establish a factory capable of producing 120,000 tons of cathode materials per year, which can source batteries to power about 1.2 million units of all-electric performance vehicles over a space of 1.7 million square meters (420.08 acres) in Clarksville, Tennessee.

Construction will begin in the first quarter of next year to start mass production by the end of 2025. Through expansion, capacity would be raised to 120,000 tons by 2027.

The Tennessee plant will produce high-nickel NCMA cathode materials for next-gen EV batteries with improved battery capacity and stability. It will feature the company’s most advanced production technology employed to produce more than 10,000 tons of cathode materials per line at its fourth cathode manufacturing site in Cheongju, Korea.

Smart factory technology will also be implemented to automate the entire production process, with a quality analysis and control system.

The new facility will be operated entirely with renewable energy from solar and hydroelectric power.

LG Chem expects to be eligible for federal tax incentives under the IRA. It has sought for supply partnership with materials and metal companies as well to help its global customers meet the IRA requirements for incentives on EVs.

LG Chem aims to expand its revenue from battery materials business to 20 trillion won by 2027 from an estimated 5 trillion won this year. 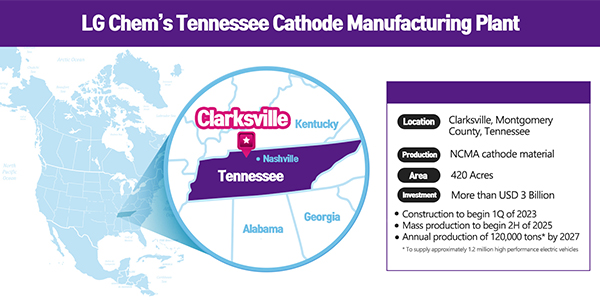 The State of Tennessee, a landlocked state in the Southeastern region of the U.S., has geographic advantages thanks to its proximity to key customers including Ultium Cells, an Ohio-based JV between LG Energy Solution and American automaker General Motors. It is easy to import raw materials in the state, and the state and local governments offer tax breaks on facilities and land.

“LG Chem’s decision to invest $3.2 billion in Clarksville is a testament to Tennessee’s unmatched business climate, skilled workforce and position as a leader in the automotive industry. I thank this company for creating more than 850 new jobs to provide opportunity to Tennessee across Montgomery Country,” said Governor Lee.

Commissioner McWhorter also welcomed the investment decision, saying “I appreciate LG Chem for its substantial investment in Clarksville and look forward to building a successful partnership with the company in the years ahead.”