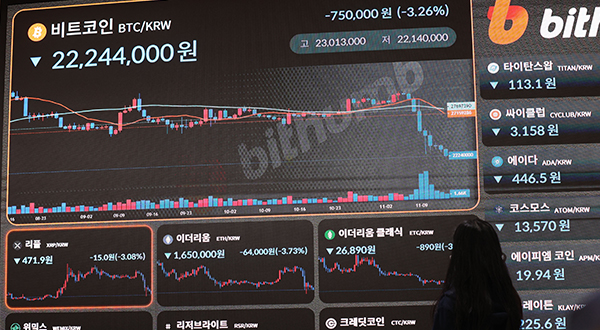 As the collapse of global crypto exchange FTX continues to send shockwaves, major investors and shareholders of Korea’s major crypto exchanges are experiencing sharp fall in value of their equity holdings.

Hanwha Investment & Securities in its third-quarter business report said that the value of its 5.97 percent stake in Dunamu, operator of the country’s largest cryptocurrency exchange Upbit was cut in half to 336.9 billion won ($251 million) in the third quarter from 651.4 billion won at the beginning of the year.

Woori Technology Investment also disclosed that the value of its Dunamu stake fell to 4.8 billion won per 1 percent of stake from 109.4 billion won in nine months.

The case is the same for shareholders of Bithumb, the country’s second-largest crypto exchange.

Inbiogen in the third-quarter report said the value of its Vidente stake sank to 4.8 billion won per 1 percent from 11.9 billion won nine months ago.

As repercussions from the FTX-triggered crypto market crisis spread across the sector to frighten away investors, Korbit announced it will open the data on its digital assets holdings to the public. Korbit is the first among the country’s major crypto exchanges to do so.