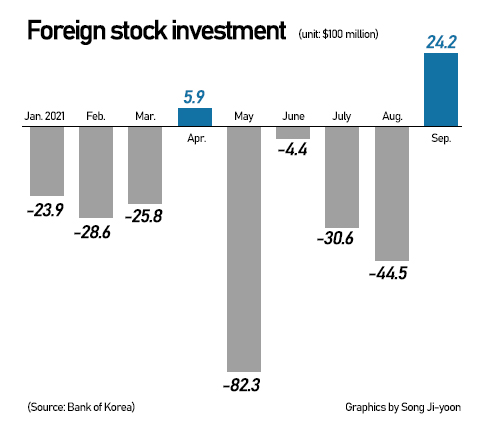 According to data released from the Bank of Korea on Thursday, offshore investors net purchased $2.42 billion worth of Korean stocks in September, turning their position to net buying in five months. The figure marks the biggest monthly net buying so far this year.

Foreigners’ selling spree lasted until August after they net purchased $590 million worth of local stocks in April. They offloaded a net $8.23 billion in May, $440 million in June, $3.06 billion in July and $4.45 billion in August.

The September net buying is mainly due to foreigners snatching up chip stocks, reversing their massive offload in August, a source at the central bank explained.

In the bond market, offshore investors net bought $4.6 billion worth of bonds last month, maintaining a net-buying position for the nine consecutive months.

By Ahn Byung-joon and Lee Soo-min