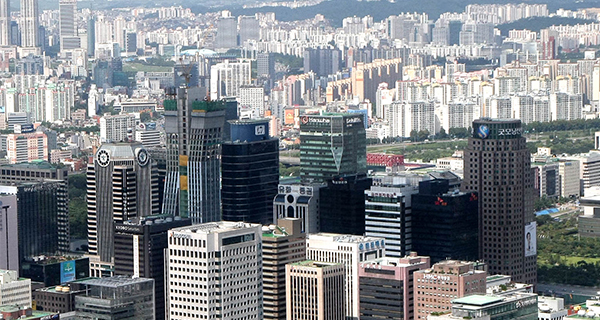 이미지 확대
Five Korean brokerages are expected to join the pretax income club of near $1 billion this year even as stock trading turnover has nearly halved lately from earlier in the year as they successfully sourced increased income from their own investment.

Last year, Korea Investment & Securities reported pre-tax earnings of 853.0 billion won on a separate basis. Its income for this year is estimated at 1.3 trillion won.

The big five have eagerly expanded beyond brokerage service. They have enhanced investment banking and direct trading services to generate stable returns and react better against volatile stock markets. Daily trade turnover that had hovered above 26 trillion won on the Kospi, Korea’s main bourse, in January has shriveled to 14 trillion won last month.

Securities companies are expected to have earned more from asset trading. Earnings from direct investing are estimated to have contributed 21.6 percent to their entire earnings this year, sharply up from the previous year’s 13.8 percent.

Their growth from diversification already has become visible.

According to the Korea Financial Investment Association, the combined earnings before interest and taxes of 59 securities operating in Korea reached 7.08 trillion won for the January-June period this year. They had earned 3.2 trillion won a year ago.

Securities companies are keeping up with their solid performance after enjoying big earnings from the retail stock trading boom last year. Their combined net income after tax for the first half was 5.2 trillion won, nearly matching 6.08 trillion won combined income of commercial banks.

In 2019, securities companies earned 4.9 trillion won in full-year net profit, less than half of 10 trillion won generated by banks.