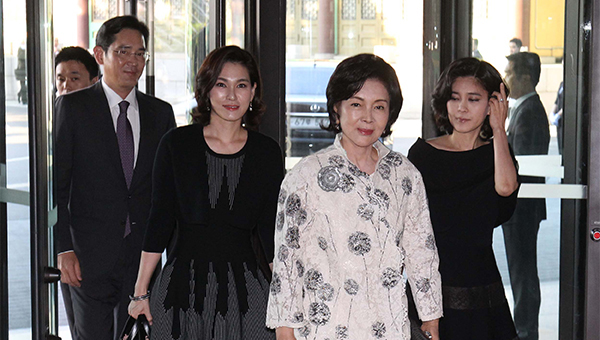 Hong Ra-hee, widow of late Samsung Chairman Lee Kun-hee and former director of Leeum, Samsung Museum of Art, signed a contract to sell 19,941,860 shares of Samsung Electronics worth 1.43 trillion won based on the Friday closing price with KB Kookmin Bank, according to a disclosure on Saturday.

Hong, the current largest individual stakeholder with a 2.3 percent stake in the world’s largest chipmaker, decided to unload 0.33 percent for payment of the inheritance tax.

Her two daughters also inked deals with KB Kookmin Bank to hand over their holdings in other group affiliates.

Combined shares to be sold by the family are worth about 2.16 trillion won. This is the first time the owner family tried to sell their stakes directly via a trust.

The late chairman left about 26 trillion won worth assets including stocks valued at 19 trillion won. The bereaved family members in April said they will divide the tax dues, worth above 12 trillion won, into six over the next five years.

By Park Jae-young and Lee Ha-yeon