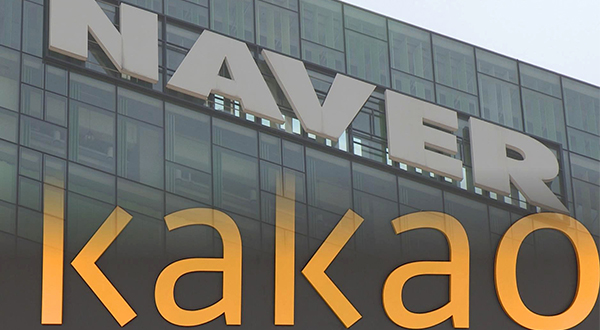 이미지 확대
Shares of South Korea’s tech giants Naver Corp. and Kakao Corp. tanked on Wednesday as the ruling front and government move to regulate their sprawling business and influence.

“Kakao who describes itself as an innovative company should not repeat the past of large companies of entirely chasing profit with disregard to fair play and symbiotic growth,” said Song Young-gil, the leader of the ruling Democratic Party, on Tuesday at a discussion held by lawmakers of the party to seek ways to prevent unfair acts of rapidly growing platform companies.

The huge losses in their stock price were also driven by the financial authorities’ order on Kakao Pay and Naver Financial, the fintech units of the two companies, to register as ‘brokerages.’

The decision of the Financial Services Commission and Financial Supervisory Service came amid criticism that the financial units engage in brokering activities as they recommend funds and financial products to customers, so they should be subject to the new Financial Customer Protection Act enacted in March. The companies had argued it is advertising business, not brokering.

The government and ruling party have begun to strengthen regulatory oversight on the platform giants whose offspring penetrate virtually into every industry. The ruling party worry Naver and Kakao’s aggressive expansion could threaten small business owners and self-employed people.