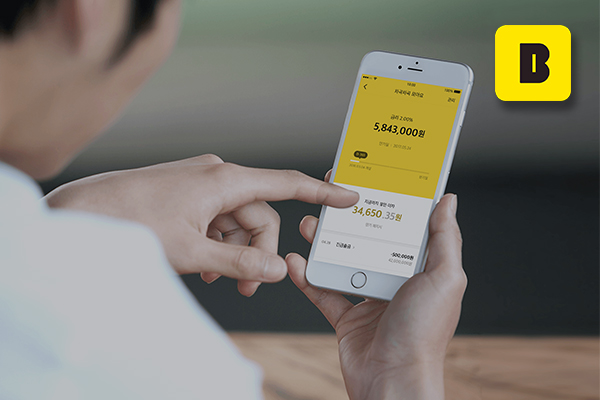 South Korean financial majors are doling out handsome mid-year dividends from their record first-half earnings as they hope to indulge shareholders ahead of the stock market entry of app-based Kakao Bank who has enlarged over the five years to threaten longstanding traditional lenders.

KB Financial Group’s board of directors on Thursday okayed an interim dividend of 750 won ($0.65) per common share amounting to 292.2 billion won. Dividend will be paid out next month to stockholders of record on June 30, 2021.

It is the first time for KB Financial Group to pay out mid-year dividend since establishing holding structure.

KB will hand out year-end dividend payment for 2021 as usual.

The generous payout results from record earnings in the first half owing to jump in borrowings and lending rates and asset market boom.

이미지 확대
KB Financial Group Inc. on Thursday disclosed it raked in a net income of 1.2 trillion won in the second quarter ended June 30 on a consolidated basis to register an all-time high bottom line figure of 2.5 trillion won for the first half. The results are up 22.7 percent and 44.6 percent, respectively, from a year earlier.

Its commissions income amounted to 865.4 billion won in the second quarter, up 21.7 percent on year, thanks to brisk securities sales. Its expenses were cut after bad debt reserves shrank 24.4 percent on year to 223.7 billion won.

Hana Financial Group Inc. will pay out an interim dividend of 700 won per common share, totaling 204.1 billion won. The amount is 40 percent more than a year earlier, when the financial group cut its interim dividend to keep to payout ratio of 20 percent as advised by local financial authorities amid Covid-19 crisis. The group has been making midyear payouts every year since 2005 except in 2009 due to global financial meltdown. 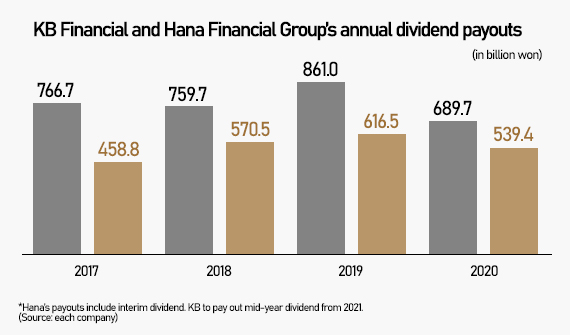 이미지 확대
Hana Financial Group saw its second-quarter net income jump 33.2 percent on year to 917.5 billion won on a consolidated basis. In turn, it posted record 1.75 trillion won in the bottom line for the first half, up 30.3 percent on year. Its non-bank units including securities brokerage and credit card performed especially well, contributing 37.3 percent to its total income, up 7 points than a year earlier.

The giving mood by financial majors takes place ahead of the much-feared Kospi arrival of Kakao Bank next month.

The IPO priced at $2.2 billion will instantly make the digital-only bank capitalized at 18.5 trillion won, making it third largest financial stock after KB Financial and Shinhan Financial upon joining the market on Aug. 6.