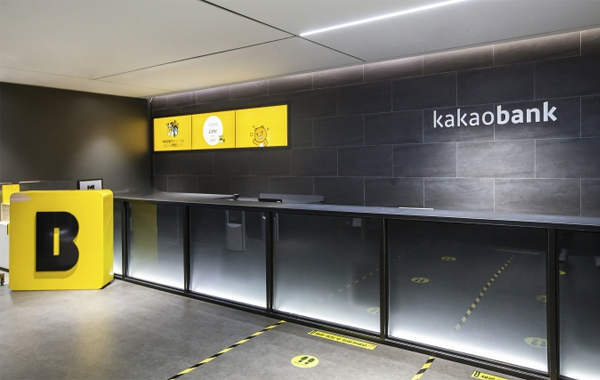 이미지 확대
Kakao Bank Corp. is set to debut on the Kospi in much fanfare as the first bank stock in Korea in nearly 30 years and the first non-physical lender, with its IPO priced at top-end of 39,000 won ($33.90) by drawing as much as 2,585 trillion won from institutions.

Despite the talk of overvaluation, the bank running on Kakao Talk, the platform almost every Korean uses daily, the IPO of 65.45 million shares would easily raise 2.55 trillion won after pricing at the top end of 33,000 won-39,000 won band. More than 45 percent of the institutions promised to hold onto the shares for some time. The competition ratio was 1,732.83 to 1.

Upon debut, the app-based lender would be valued at 18.5 trillion won, trailing closely behind Shinhan Financial Group at 19.4 trillion won, the second largest financial holding name.

Any leftovers from 13.09 million shares reserved for Kakao Bank employees will also go on public sale. Retail subscription will take place on July 26-27, and Kospi listing on Aug. 6.

Kakao Bank would be the first digital-only bank to go public, not just in Korea but also in the world. Other well-known online lenders like China-based WeBank and France-based MyBank are still unlisted.

Kakao Bank’s growth has been staggering.

The company opened 6.2 million accounts in the first year, which is 40 times what 16 traditional lenders had achieved via internet and mobile platforms as of 2016. The bank dominated 7 percent of credit loan market in just four years of service. In new openings, it accounted for 13 percent based on value.

As many as 4.29 million accounts opened with Kakao Bank for stock trade as of the end of June. Credit card application has totaled 700,000 since the service launch in April last year.