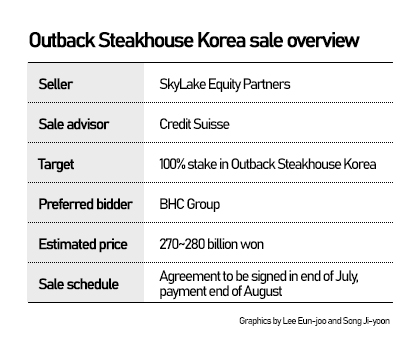 According to multiple sources from the investment bank industry on Tuesday, SkyLake Equity Partners under the advice of Credit Suisse chose BHC as the primary candidate to buy over the American casual dining chain in Korea.

BHC is said to have scored highest in pricing and aptness to oversee the dining chain, according to a source in the investment bank.

With Outback Steakhouse under its arm, BHC could achieve 1 trillion won sales milestone earlier than expected with portfolio complete from chicken takeout to Korean and western dining choices.

Its holding parent Global Restaurant Group has been bulking up even under Covid-19 environment.

SkyLake that bought Outback Steakhouse for 57 billion won in 2016 has scaled up the company by five times over five years. It is said to be asking for 270 billion won-280 billion won.

BHC is expected to sign an official agreement with SkyLake later this month.