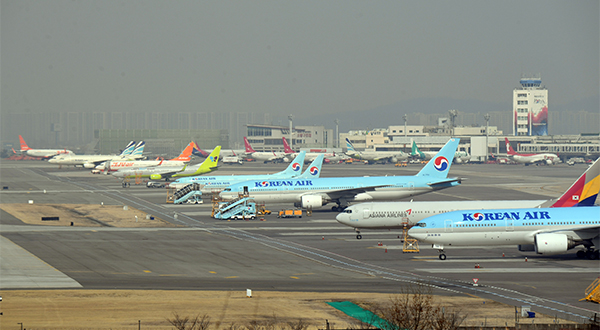 South Korean airline stocks are back skidding on delayed normalization in international travel due to outbreak of virus variants.

On Tuesday, shares of the country’s flag carrier Korean Air Lines closed 1.15 percent lower at 30,000 won ($26.11) after losing 3.65 percent in the previous session. They have reversed direction June as green light on air travel went off with variants continuously posing danger despite vaccination progress.

The number of passengers using Incheon International Airport was tallied at 245,000 in June, up 43.3 percent from a year-ago period but down 96 percent against two years ago before the virus situation, according to Hana Financial Investment.

But air freight traffic in June added 29 percent on year to 276,000 tons, extending its growth streak for 12 consecutive months.

Such strong cargo demand is brightening the outlook for Korean Air Lines.

“Korean Air Lines is expected to deliver better-than-expected operating profit of 141.8 billion won in the second quarter thanks to its robust air cargo business. Revenue from the cargo business is estimated to have reached a record high on a 16.1 percent rise in flight operation,” said Park Seong-bong, an analyst at Hana Financial Investment. 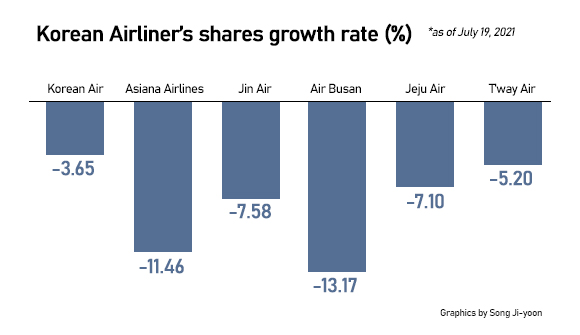 The average stock price target for the full-service carrier was upped to 36,400 won.

Asiana Airlines is projected to have successfully swung back to an operating profit of 27.7 billion won in the second quarter with revenue of 983.1 billion won up 10.9 percent on year, according to Eugene Investment & Securities.

Low-cost carriers will continue to grapple with cash shortages because they heavily rely on air travel, but some are expected to shore up their business with rights offering.

The country’s No. 2 LCC name T’way Air issued 66.8 billion won worth new shares last year and additional 80 billion won worth in April. Jeju Air and Air Busan, whose liabilities exceeded working capital by 28.7 percent and 34.4 percent each, also are preparing rights offering worth 200 billion won and 250 billion won, respectively. If erosion rate is above 50 percent, they are blacklisted for extra watch.