Multinationals ready for $6 bn race after Hanon Systems, No. 2 in auto climate control 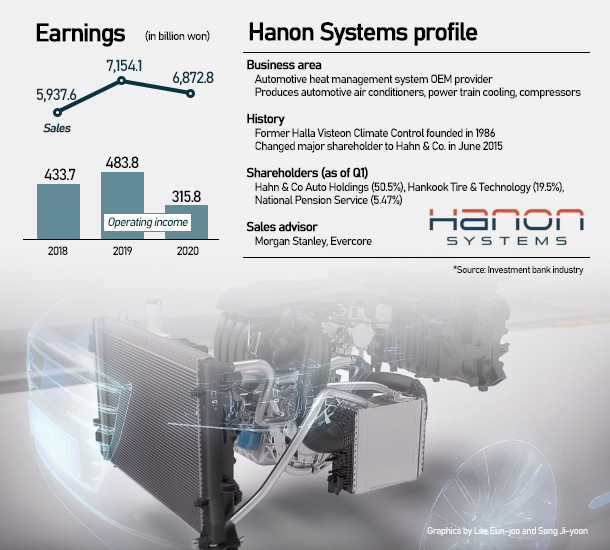 이미지 확대
Multinationals have lined up for over $6 billion majority stake in Hanon Systems, South Korea-based global No. 2 in automotive thermal and energy management solutions.

According to multiple industry sources on Thursday, Hanon Systems invites preliminary bids by June 22 for a 70 percent stake – 50.5 percent owned by Hahn & Co. and 19.5 percent by Hankook Tire & Technology Co. Hanon Systems and its lead managers Morgan Stanley and Evercore are open to various M&A ideas from potential buyers.

Shares are Hanon are trading 6 percent higher at 18,350 won in early Friday trading.

Top candidates are Valeo of France and Mahle of Germany, respectively, No. 3 and 4 after Hanaon in vehicle thermal systems. Hanon Systems comes after No. 1 Japan’s Denso Corporation.

Valeo has hired JP Morgan as financial advisor for the sale and Mahle Deutsche Securities as not to lose the opportunity to become a formidable rival to the Japanese leader. They also could bring on Hanon Systems’ customers Hyundai Motor and Kia in Korea as well as Ford, Volkswagen, GM, and Tesla.

Strategic matchmaking has been active in the field of automotive thermal management to build economies of scale amid the surge of battery-based electric vehicles.

Financial capital tapping the deal include big names like Bain Capital, The Carlyle Group, KKR, and Texas Pacific Group due to the potential in the vehicle thermal segment.

The Carlyle Group has already hired Credit Suisse as its financial advisor to design the offer.

LG Group reportedly has been approached by global PEFs to join their consortium to up their chances.

Hanon Systems has built up a high reputation in the global thermal management market and financial integrity.

Hanon Systems has maintained an annual cash flow of 800 billion won. “Although there is heat outside the race, but who goes till the end cannot be known,” a bank source said. The deal also could pan out differently depending on the offers from potential buyers.