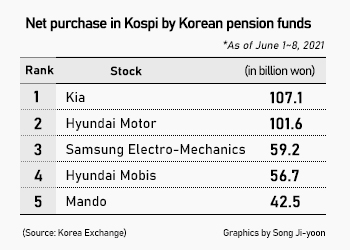 According to the Korea Exchange on Tuesday, pension funds net purchased 950 billion won ($85.2 million) Kospi shares on June 1-8. It was the first time for them to turn into net stock buyers in the Korean market this year.

“Automobile stocks had been lackluster in April-May due to the global semiconductor shortage and have room for bargain hunting due to strong vehicle sales,” said Kim Jung-won, head of investment strategy at Hyundai Motor Securities.

“Inventory level will remain low for long, and finished carmakers will see earnings growth from sales operations. Financing units will also be able to enjoy improved earnings with an increase in used car prices,” said Lee Jae-il, an analyst at Eugene Investment & Securities.