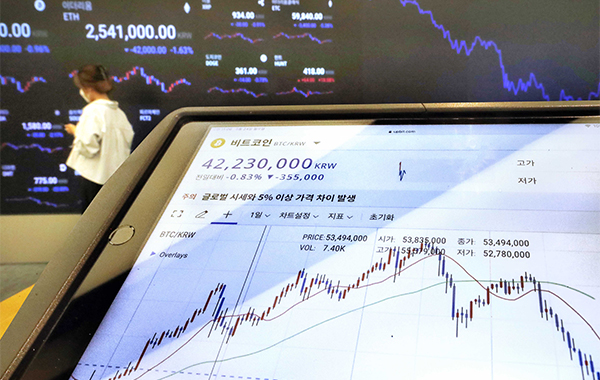 Crypto fad in South Korea is showing signs of fizzling out amid downward spiral in coin prices.

Koreans spent over 43 hours on average on crypto trading platform apps in May, up 1.5 percent from the previous month after double-digit growth in usage in the past months.

The aggregate usage time of the country’s largest crypto exchange platform Upbit by Koreans of all genders and ages totaled 77.04 million hours in May on Android, rising 1.5 percent from 75.94 million hours a month ago.

Usage of Upbit app had been showing double-digit growth since January fueled by crypto frenzy.

The total usage time of Upbit jumped 97.1 percent in January to 9.85 million hours versus 5 million in December. In February, Upbit topped the list of most-used finance apps on Android with 25.71 million hours, advancing from sixth place in the previous month. The number of hours spent by Koreans nearly doubled on month in March to 41.31 million hours. The double-digit growth streak extended into April as the total hours spent on the platform soared 83.7 percent to 75.94 million hours.

The Upbit app still remained the most-used finance app in the country in May but its usage time growth rate softened 1.5% as Bitcoin and other digital coins continued a month-long slide.

The largest cryptocurrency Bitcoin, which peaked at near $70,000 in mid-April, ended May deep in red falling 35 percent at $36,685 as investors reacted to strict regulations introduced in China and the U.S.

Time spent at Bithumb, the second largest crypto exchange in the country, dropped more markedly. Users of Bithumb spent 9.91 million hours in total on the platform in May, falling 16.7 percent from 11.90 million hours in April.