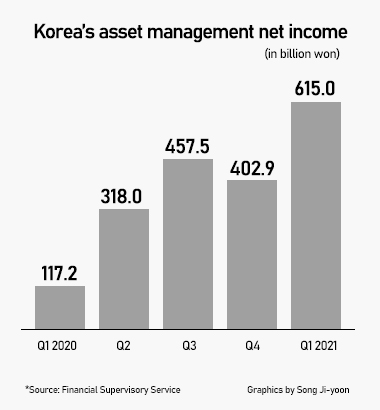 According to data from the Financial Supervisory Service on Tuesday, asset managers in Korea saw their combined net profit surge 52.6 percent on quarter and a whopping 424.7 percent on year to record 615 billion won ($552.8 million) during the January to March period.

It was the highest quarterly figure, breaking the previous record of 457.5 billion won set in the third quarter last year.

Their stellar earnings came as a decrease in commission income was offset by a fall in operating expenses, data showed.

Their return on equity rose 7.8 percentage points on quarter to 25.7 percent.

The investment houses’ combined assets under management stood at a historic high of 1,247.8 trillion won as of end-March, expanding 3.3 percent, or 40 trillion from the previous quarter.

There were 330 asset managers at the end of March, with four new players added from the previous quarter. The number of their workers jumped to 10,291, expanding 3.3 percent from last quarter.