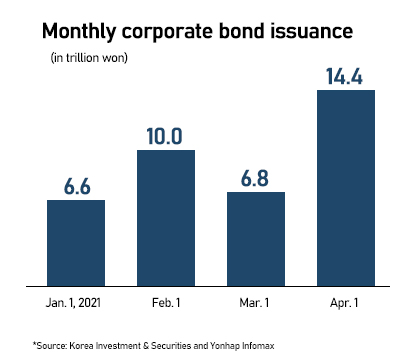 According to Yonhap Infomax data on corporate bond market compiled by Korea Investment & Securities Co., corporate bond issuance in April came to monthly record of 14.42 trillion won, up 111.76 percent from the previous month.

April is a traditionally strong month for bond issuance because companies tend to return to the debt market after finishing annual reports and general shareholders meetings in March.

On top of the seasonal effects, companies rushed with issuance last month as they projected interest rates would go higher next year.

Debt issues were 439 percent oversubscribed on average, and priced at a spread of 7.4 basis points below the market yields, indicating investors’ hardy appetite for debts amid ample liquidity, according to Korea Investment & Securities.

A number of debt issuers sold larger amounts than they had planned in society and governance (ESG)-themed and high yield bonds.