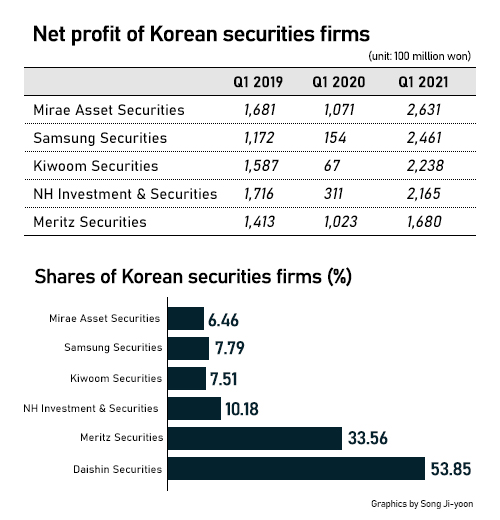 The country’s top four brokerage names excluding those under financial holding firms are expected to turn out a net profit of above 200 billion won ($179.9 million) for the first three months this year, according to the consensus data compiled by Seoul-based financial data provider FnGuide on Tuesday.

Kiwoom Securities Co. is estimated to have earned 223.8 billion won in net profit for the January-March period, surging a whopping 3,244 percent from a year ago. The figure is even 4.46 percent higher than the profit three months ago when the market continued its rally amid retail stock fever.

Samsung Securities is forecast to report highest-ever quarterly net profit of 246.1 billion won, up 193.81 percent from a quarter ago and 1,497.84 percent from a year earlier on a rapid increase in brokerage commission fees.

“Samsung Securities’ brokerage commission fees are estimated to have jumped 41.4 percent on year to 244.8 billion won in the first quarter, and interest income up 22.6 percent to 179.4 billion won,” said Kim In, an analyst at BNK Securities.