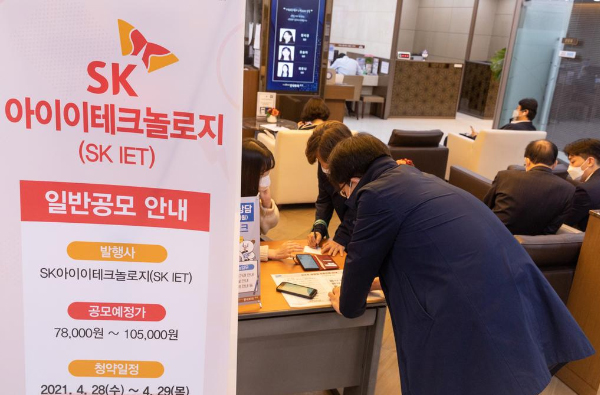 According to multiple sources from the brokerage industry on Tuesday, SK IET is receiving subscriptions from its employee stock ownership association on Wednesday while public subscription in underway in sizzling heat with retail deposits already surpassing the level of the last record made by SK Bioscience on the first day.

SK IET priced its IPO at 105,000 won apiece in a record-making bookbuilding session with an institutional competition ratio of 1,882.9:1.

Of total 21.39 million IPOS, 20 percent or 4.278 million shares are reserved for the employee association. The total subscription amount would reach 449.2 billion won ($404 million).

SK IEP has 218 employees on the payroll, which means a staff would have to pay 2.06 billion won for his or her share in the IPO.

Given the hefty price, some could choose to forfeit some, leaving greater share for retailers.

If SK IET achieves a double win on the first day of Kospi trade on May 11 by opening with a doubled IPO price and closing the day with daily ceiling of 30 percent jump, its employees would gain 160 percent profit.