S. Korea to remove short-sale ban as planned in March

South Korea will remove near one-year-long ban on short selling activities when expiry approaches in March as planned, despite calls for another extension in fear of cold splash on the retail stock frenzy.

The Financial Services Commission on Monday issued a rare text press statement on Monday, reiterating that amendments to short-sale regulations were being finalized to re-allow the trade from March as planned.

Some ruling party lawmakers have been petitioning for another extension as short-sale ban from March had been viewed a key motivator for unfazed retail buying.

Retailers, the primary force behind the Kospi’s stunning performance – the best so far this year among key markets - have been calling for another extension in the initial six-month ban, as a market crash would bode badly for the ruling front in April by-elections to elect mayors for the country’s two most important metropolitans Seoul and Busan.

Authorities banned short-selling, a bet on price fall, done mostly by foreign institutions on March 13 when Kospi crashed to 1,771.44 and Kosdaq to 524 amid frantic foreign selloff. The ban was extended for another six months in September and goes off on March 15.

The financial regulator sees little justification to continue the current ban as the local stock market has been reaching new heights. The main Kospi has remained above the 3,000 threshold after closing above the mark for the first time on Thursday. 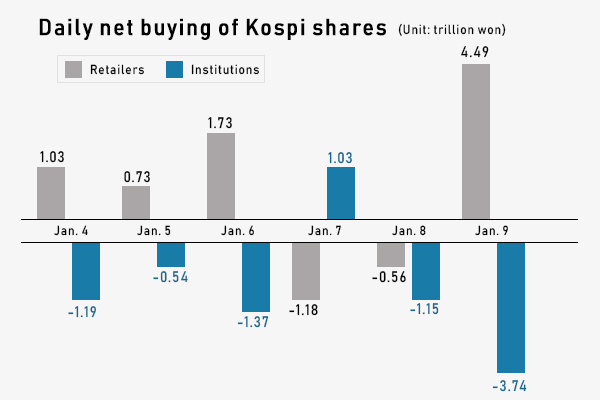 The financial regulator will improve market transparency by establishing additional safety net by the time the cap is removed. Measures include enhancing monitoring and penalty over illicit short selling activities.

The regulator has already come up with a new rule of imposing criminal punishment of one year or more imprisonment plus a fine on naked short selling from April. Covered short selling activities – or buying back borrowed shares to close out an existing short position – will also be under close monitoring.

The regulator also plans to lower the bar and invite more retail investors to take part in short selling activities given currently they are mostly carried out by foreign and institutional investors.

The lift will likely spook retailers and splash cold waters. Bio and healthcare shares would be most volatile, analysts noted.

“Given the large share taken up by bio and healthcare shares in the Kosdaq market, the lift in the short selling ban would be an important inflection point on stock prices,” he said.