Concerns for overshooting and overheating have been raised as the Kospi continues a hot streak, gaining over 10 percent already in the new year.

Some argue justice behind the rally due to anticipation of strong corporate growth, while others warn of bubbly signs.

The Buffet Indicator that measures the market cap against the gross domestic product ratio is projected to hit a record high of 124.7 percent this year, according to Kyobo Securities. A market with a ratio of over 100 percent is considered overvalued.

The biggest concern is that the primary force behind the rally comes from borrowed money.

The margin account balance, or money borrowed from brokerages by investors, reached an all-time high of 20.1 trillion won ($18.3 billion) last week, according to the Korea Financial Investment Association. The balance has nearly doubled from 9 trillion won to 10 trillion won in the beginning of 2020. 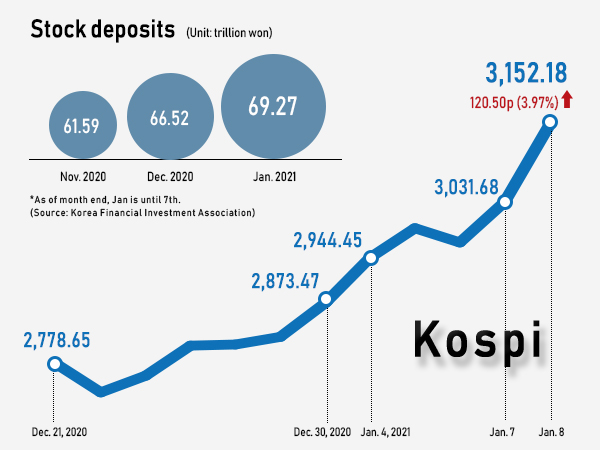 Another reality check is the low return on equity (ROE), which measures a company’s profitability in relation to stockholders’ equity. Bloomberg estimated the ROE of Kospi-listed companies this year to be 7.28 percent, compared with 23.1 percent for S&P 500 companies, 9.91 percent for Nikkei 225 companies and 9.41 percent for Shanghai Composite Index firms.

“Investors should be cautious of current stock investment given the low ROE,” said Kim Han-jin, senior analyst at KTB Investment & Securities. “Even if it is on an upward trajectory, the pace of ascent is just too fast.”

Still optimists think the ample liquidity will continue to fuel the bullish trend at least for the next two years as long as interest rates stay benign.

Korea’s average M2 money supply, including cash, checking deposits and other near money deposits, has now reached 76 percent of the market cap. Investor deposits are at a historic high of 69.3 trillion won, according to the Korea Financial Investment Association, which could further drive massive market gains.

Fundamentals also have been the upside. Korea is expected to rebound faster than other economies. Korea’s leading economic index was 101.2 in November, higher than even China’s 100.6, according to the Organization for Economic Cooperation and Development.

Given the upbeat outlook, some experts say Korean markets still have room for growth. Kospi’s forward price earnings ratio (PER) this year is estimated at 15.3x compared with 23.3x for S&P 500, according to Bloomberg data.