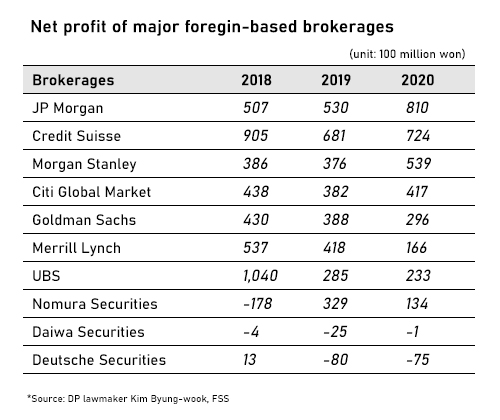 According to Maeil Business Newspaper that received data on earnings of foreign investment banks’ Korean operations from the Democratic Party lawmaker Kim Byung-wook on Thursday, big names such as JP Morgan, Credit Suisse, Morgan Stanley and Citi Global Market saw their net income from January to September last year surpass that of the whole 2019.

On the other hand, companies that focused on retail stock business was hit hard mainly due to the Korean government’s short selling ban, which soured foreign appetite in Korean market. Net income of Merrill Lynch, which is known to have a higher proportion of retail stock brokerage business than others, shrank to 16.6 billion won for the first nine months of last year compared to 41.8 billion won in 2019. Japanese firms also suffered due to weak marketing and frosty Korea-Japan relations, according to an industry official.

The Financial Supervisory Service said foreign investors maintained their selling spree from February, when the first wave of Covid-19 outbreak hit the country, to June. Their net selling amounted to 3.22 trillion won in February, 13.45 trillion won in March, and 5.29 trillion won in April.