The floating-rate debts in three-year maturity are Secured Overnight Financing Rate (SOFR)-linked green bonds, the bank said. The proceeds will be used for the government’s green new deal project such as expansion of battery manufacturing facilities.

Green bond is a type of ESG debts issued for the purpose of socially responsible investment. Its use is limited to environmentally-friendly businesses such as carbon reduction and renewable energy projects. 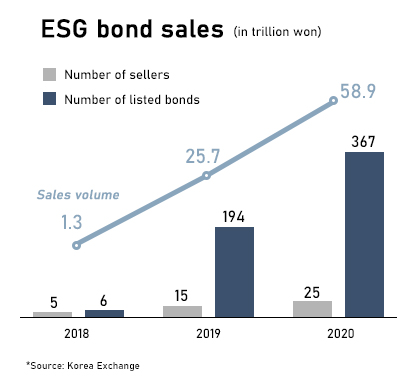 이미지 확대
The country’s second largest automaker Kia Motors Corp. disclosed Wednesday that it raised 300 billion won ($266.7 million) by offering green bonds. It said the proceeds will be injected to its three-year R&D project for eco-friendly cars such as electric vehicles.

The automaker was believed to have attracted more than 2 trillion won orders during a book-building session, according to sources.

Its bigger sibling Hyundai Motor Co. also sold 400 billion won worth green bonds last month to increase investments in green car business. It was up from 300 billion won in its initial offering thanks to the overwhelming demand of 2 trillion won or above during a book-building session.

The issuance of the ESG-themed bonds has been on a rapid increase since KDB sold the bonds for the first time in the country in 2019. Korean firms issued a total of 85.9 trillion won worth ESG bonds over the past three years, with last year’s offering amounting to 58.9 trillion won, according to the Korea Exchange on Wednesday.

Private companies are increasingly turning to ESG issues since the beginning of this year, while there were only four non-financial private firms out of 29 sellers of ESG notes until last year. Market analysts suggest at least 30 companies are expected to issue their maiden ESG papers within the first half of this year.