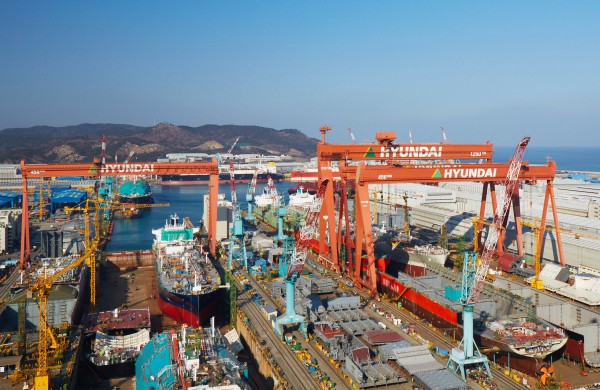 Its parent Korea Shipbuilding & Offshore Engineering said earlier in a disclosure that HHI will issue new shares tantamount to 20 percent of outstanding shares to raise 1 trillion won ($890.7 million) without yielding any shares owned by the parent. The banks estimate the shipyard’s value at 5 trillion to 6 trillion won.

The proceeds will be used to develop eco-friendly vessels run on hydrogen or ammonia and autonomous ships to take a new leap forward to become a global shipbuilder having strengths in environmental, social and governance (ESG) factors. On Wednesday, HHI and Saudi Arabia’s Aramco signed a deal to launch hydrogen and ammonia business.

HHI posted 101.5 billion won in operating profit and 6.3 trillion won in sales from January to September last year on a consolidated basis, while its net loss reached 67.6 billion won. The company’s earnings results for the half of this year would have a huge impact in calculating its IPO value.

A market analyst said HHI is truly the world’s leading shipbuilder, and it needs to promote its new business plan effectively to increase its IPO value.