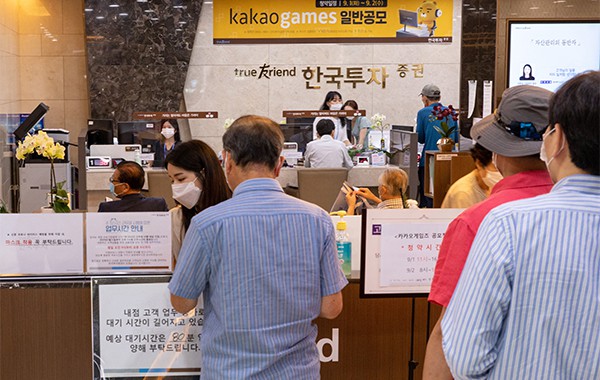 According to the Financial Supervisory Service on Thursday, a total of 70 companies went public on Korean bourses last year, down from 73 a year earlier. But the new offering turnover totaled 4.5 trillion won ($4.07 billion), surging 40.6 percent from the previous year.

Retail craze drove oversubscription with the competition ratio averaging at 956 to 1, almost doubled from 509-to-1 average a year ago. Aesthetic medical device maker Ilooda Co.’s initial offering was oversubscribed by a record 3,039 times.

Institutions likewise showed strong appetite for new stocks last year, with 80 percent of the IPOs priced at the top end of the guidance band due to hot demand.

Nearly all of them proposed lockup, increasing the ratio of locked-up shares to 19.5 percent of the entire allocation to institutional investors compared with the share of 16.5 percent in 2019.

More ventures employed fast-tracking to go public on the Kosdaq. About 60 percent of them, mostly medical devices and medicine developers, were exempted from financial and other IPO requirements after the technology reviews.