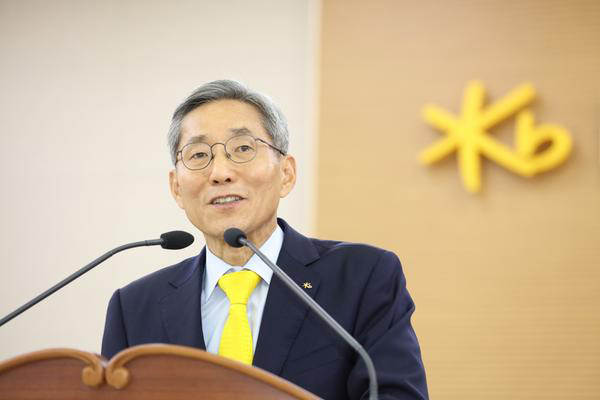 이미지 확대
KB Financial Group has proposed to extend the term of six-year chairman Yoon Jong-gyu for another three years as the financial conglomerate strives to extend growth momentum that has gained traction under Yoon’s leadership.

The bank’s committee for appointing chairman on Tuesday decided to propose to retain Yoon as chairman for a third term. The decision is to be finalized at an extraordinary shareholders meeting on Nov. 20.

If he wins final approval, his third term would end on November 2023.

Since November 2014, Yoon has been leading KB Financial Group, and he has been highly regarded for his leadership in facilitating the growth of the financial group to become one of the country’s top two, with aggressive investment in non-banking operations and global outreach.

KB Financial Group has 569 trillion won ($484 billion) in assets as of the end of June this year, which is nearly double the amount reported at the end of 2014 when Yoon began his first term. During Yoon’s second term in 2017, the financial group earned a record-high profit of more than 3 trillion won, reclaiming the No.1 Korean financial group title in nine years. Since then, the group has been in a tight race over the championship title with Shinhan Financial Group.

The financial group, however, faces challenges of defending its top position after its Jan-June net profit fell 6.8 percent to 1.7 trillion won from the same period last year due to loan loss reserves set aside for potential losses from COVID-19 fallout.