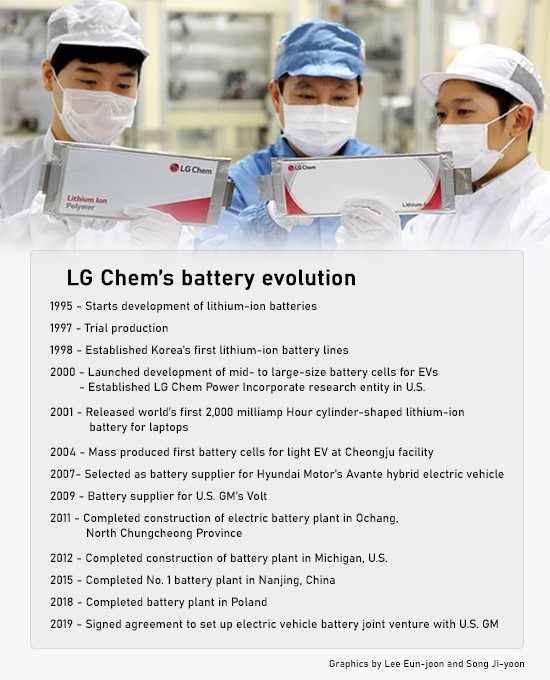 South Korea’s LG Chem Ltd. will spin off its battery division which has ascended to the top in the global EV power market and inflated the value of its stock to a standalone company on Dec. 1.

LG Chem whose business spans over from traditional chemicals to new materials and bio products held a board meeting Thursday and approved the demerger scheme. The separated entity – tentatively called LG Energy Solution – will be launched on Dec. 1 after shareholder approval on Oct. 30.

LG Chem will command a full ownership in the new entity responsible for vehicle battery, energy storage system, and small-sized li-ion battery businesses. It is undecided when the battery maker would be listed.

LG Chem said that the decision was made as the company judged it was now the right time for the spinoff amid structural profit-making of EV battery sector and rapid growth of battery industry. It added that the spinoff will allow the company to focus on specific business area and enhance business efficiency to lift up “corporate and shareholder value.”

The spin-off however should not come as a shock.

The battery business has become too big for the company and requires expansion to meet the burgeoning demand.

LG Chem this year ascended to No. 1 in electric vehicle (EV) battery market. Demand for LG Chem-made EV batteries from global car manufacturers has been on a sharp rise amid overall supply shortage.

이미지 확대
According to industry sources, LG Chem had put off the spinoff plan as it expected short-term deteriorated earnings due to business fallout from COVID-19. The company, however, reversed its decision after its EV battery business posted profit in the second quarter.

Cha Dong-seok, chief financial officer at LG Chem, said in a conference call after its second quarter earnings report that in relation to the battery unit spinoff, the company is “reviewing options from various angles to improve shareholder value and business,” reigniting the separation plan.

In its second quarter earnings report on July 31, LG Chem expected its EV battery business to grow more than 30 percent every year given growth in EV market and order backlog. It also proposed target sales of over 30 trillion won ($25.5 billion) in 2024, up from an estimated 9 trillion won this year and 16 trillion won next year.

In a move to reach target sales, LG Chem would have to maintain competitiveness of its battery business.

According to energy market tracker SNE Research, LG Chem commanded 24.6 percent share in the global EV battery market in the first half of this year, ascending to No. 1 position. The ranking was followed by China’s CATL with a market share of 23.4 percent and Japan’s Panasonic 20.4 percent. CATL and Panasonic are expected to carry out large-scale investment to snatch back market lead by expanding facility and business.

LG Chem also plans to up its annual EV battery production capacity to 100 gigawatt hours (GWh) by the end of this year and more than double the capacity to 220 GWh in 2022. It also injected over 1 trillion won in facility expansion in the first half of this year.

The issue, however, lies on the fact that much of LG Chem’s investment on its EV battery business has relied on profit from other business areas such as petrochemical. An unnamed industry official said that LG Chem will face limits in carrying out planned investments through methods used so far. The best way would be to seaperate its battery business to attract funds, the official added.

이미지 확대
According to multiple sources from the financial investment industry, LG Chem is dominant leader in Europe, world’s largest market for EVs. Europe sold 410,000 electric cars in the first six months of the year, surpassing Chinese sales of 380,000 units.

France, Germany, and other European countries have been enhancing EV subsidy policies in line with environmental policies set out by the European Union, creating a more favorable business environment for LG Chem.

The Korean battery maker has also been solid with its business in China. According to foreign media reports, LG Chem produced cylindrical batteries at its facility in Nanjing, China, for supply to Tesla Model 3, which accounted for the largest 11.8 percent market share in China’s EV market.

The Korean company is considered a front runner in battery technology especially that for high-nickel batteries. Global battery manufacturers have been focused on developing high-nickel batteries rich in nickel in cathode. The higher nickel content, the higher energy density that leads to longer driving range per single charge.