Korean stock market has room to grow further regardless of U.S. decline: analysts 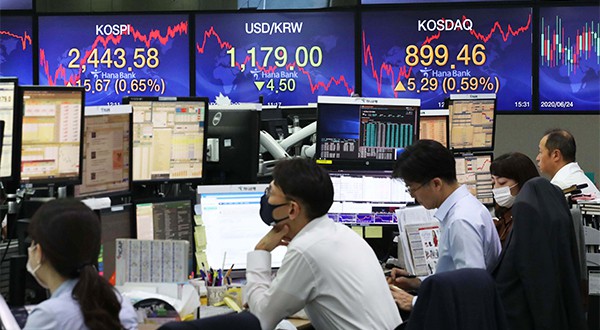 The South Korean stock market has room for further growth even if fizzling-out takes place in the United States as the local bourse is more driven by lush retail capital rather than foreign money, analysts believe.

The Kospi has gained 11.2 percent so far this year, outperforming 4.7 percent rise in the S&P 500 of the U.S. over the same period. The Nasdaq has also plateaued after a 23.2 percent rally.

Korean shares have been notoriously stagnated, adding 7.7 percent last year when the S&P 500 soared 28.9 percent and the Nasdaq 35.2 percent.

But they have stayed resilient to the recent ups and downs in the U.S. market.

The decoupling is largely owed to retail appetite that had stayed fervent enough to offset foreign selling. Retailers flocked into the stock market from March when even blue-chip shares became cheap from frantic foreign selloff amid surge in virus outbreak. 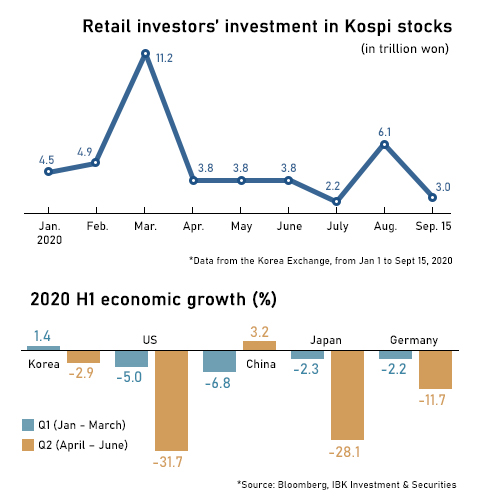 이미지 확대
They were the primary force behind the Kospi to jump above to 2,440 from 1,400 level six months ago. As of Tuesday, the combined market capitalization of Kospi and junior Kosdaq reached 2,009.9 trillion won, the highest since January 2018.

The bullish sentiment won’t likely fizzle out easily, analysts said, given the scare investment options amid cheap and easy lending environment due to pandemic woes.

Although, the economy expects to see the worst contraction in 22 years, it fared relatively well in international context, analysts said.

The Korean economy receded 2.9 percent in the second quarter, the second smallest contraction after 3.2 negative growth of China.