이미지 확대
Stock and bond offerings by the Korean Inc. rose from a year ago in the first half as local capital market was rehabilitated through multiple state rescue actions against the COVID-19 fallouts.

According to the Financial Supervisory Service on Monday, stock and debt issues by Korean companies amounted to 91.5 trillion won ($76.4 billion) in January-June this year, up 3.2 trillion won from the same period a year earlier.

The lion’s share was corporate bonds whose issues totaled 89.4 trillion won in the first half, gaining 3.3 trillion won or 3.8 percent from the same period last year, as companies rushed to the debt market to capitalize on record-low interest environment and state-led bond purchase program.

Debt financing market cooled down sharply in April amid COVID-19 crisis but it started to regain vitality from May, led by state relief program, said a Financial Supervisory Service official.

Bond offerings by general companies rose 7.8 percent to 27.8 trillion won against a year-ago period. The issues were mostly to refinance existing debts, comprising 70.4 percent of total debt issue. A year earlier, the share was 38.5 percent.

Debt issues rate A or below fell 2.4 trillion won from a year earlier, as investors’ appetite stayed biased towards high investment-grade bonds. 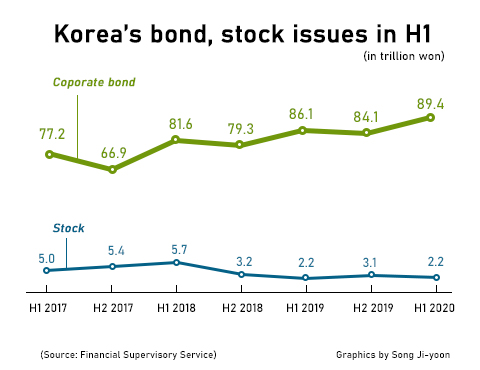 Outstanding balance of corporate bonds reached 546.3 trillion won at the end of June, up 8.6 percent from a year earlier.

Equity issues in the first half of this year totaled 2.15 trillion won, down 3 percent from the same period last year.

Initial public offerings increased 28.1 percent on year to 1.07 trillion won, largely owing to SK Biopharmaceuticals blockbuster debut on Kospi amounting to 652.3 billion won. The biotech firm was the sole IPO on Kospi in the first half. The junior Kosdaq had 23 new entrants.

Fourteen companies made secondary offerings of 1.08 trillion in the first half, down 21.8 percent from the same period last year when there were massive recapitalization by big companies in need to improve financial health.

Commercial paper issuance contracted 4.8 percent on year to 163 trillion won in January-June period this year, and short-term debt issues were down 1.8 percent to 514.5 trillion won.