Mobile payment platforms in S. Korea to be able to add after-pay option

이미지 확대
Credit line of up to 300,000 won ($250) can be created in mobile payment systems run by Naver and Kakao under new regulations to meet increased online settlements and demand.

Under the outlines for advance in digital payment by the Financial Services Commission, a payment option enabling later payment without a credit card would be added to sound mobile payment platforms of online giant Naver and messenger app operator Kakao.

The financial regulatory on Sunday announced a plan to overhaul the country’s regulation on digital financial transactions in Korea. It plans to propose a revision in the Electronic Financial Transaction Act to the National Assembly by September. The local law on the digital financial transactions has been kept unchanged since it came into effect in 2007. With use of smartphones and mobile payment services penetrated deeply into people’s daily activities, it has become urgent to make some tweaks in the law.

Under the plan, digital finance companies including mobile payment service providers Naver Pay and Kakao Pay will be allowed to expand their brokerage role and offer a comprehensive payment and settlement services. Savings accounts could be opened, although loan servicing won’t be permitted. 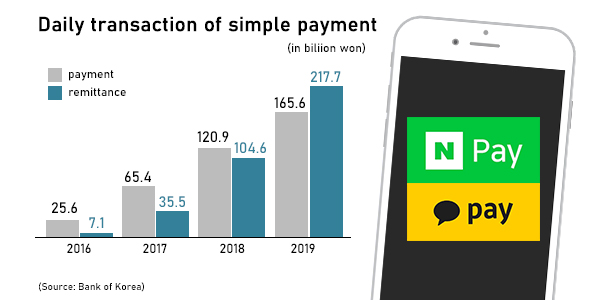 Later billing would be permissible to maximum 300,000 won, meaning that users would be able to make purchases first and pay off the outstanding balance afterwards within the limit without having to transfer money for the purchase in advance.

To be authorized as a comprehensive payment and settlement service provider, digital finance company will be required to have capital of at least 20 billion won, which is as strong as those required for credit card firms and internet-only banks with 20 billion won and 25 billion won, respectively.

By Chung Joo-won and Cho Jeehyun