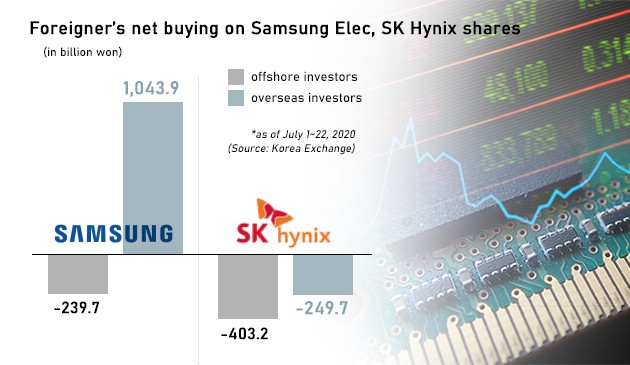 이미지 확대
South Korea’s bellwether chip stocks – Samsung Electronics Co. and SK Hynix – are showing a contrasting performance as foreign investors are buying up the former while dumping the latter.

According to the Korea Exchange on Wednesday, overseas investors net bought 1.04 trillion won ($867.7 million) worth Samsung Electronics shares from July 1 to 22, outdistancing the No.2 stock LG Electronics whose net purchase by foreigners amounted to 175.8 billion won.

SK Hynix, however, has seen a strong selloff by offshore investors, with net sale reaching the fourth highest at 249.7 billion won over the same period.

Samsung Electronics shares have gained 3.6 percent since the beginning of this month, but those of SK Hynix lost 2.2 percent.

Song Myung-sup, an analyst from HI Investment & Securities, said SK Hynix may have been hit hard by the U.S. export control to Huawei that has lost access to Qualcomm’s Snapdragon processors. The U.S. crackdown has resulted in production cut of high-end smartphones of Huawei and decrease in mobile memory chip order by the Chinese firm to SK Hynix, he added. Huawei accounts for around 10 percent of SK Hynix total sales.

On the other hand, Samsung Electronics can mitigate negative impact from the intensifying row between the U.S. and China to its semiconductor business with its home appliances and smartphone divisions, drawing investment from foreign investors.