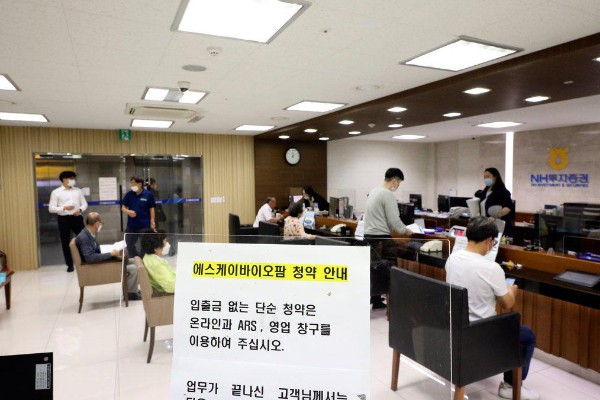 이미지 확대
The balance of cash management accounts (CMA) in South Korea dropped at an unprecedentedly fast rate last week as retail investors rushed to order the shares of SK Biopharmaceuticals Co.’s initial public offering, which would be the country’s biggest IPO in three years.

According to the Korea Financial Investment Association on Sunday, the total outstanding balance of CMAs in the country shrank to 46.85 trillion won ($39 billion) on June 24 from previous day’s 56.99 trillion won.

Analysts speculate that bulk of over 10 trillion won withdrawn from the CMAs had gone into orders for SK Biopharmaceuticals IPO shares. The Korean drug maker carried out public subscription on June 23-24 and attracted a total deposit amount of 30.99 trillion won. The listing of the new shares, scheduled for July 2, is expected to be the country’s biggest IPO in three years. 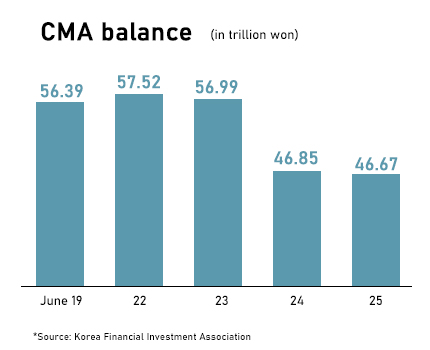 The massive inflow of investment capital into the Korean IPO market comes as stocks that have newly joined the local markets so far this year have shown outstanding performance.

As of June 26, the prices of 12 stocks that made debut on local bourses in the first half of this year jumped 52.4 percent on average from their IPO prices, according to data from the Korea Exchange on Sunday. The average price gain excludes those listed on startup-focused KONEX and special purpose acquisition companies (SPAC) for M&As, with nine out of 12 showing stock prices higher than the IPO prices.

The most notable is LET Co., an OLED equipment maker that was entered the secondary Kosdaq market on June 22. Its stock traded at 20,300 won apiece on Friday, up 160.3 percent from IPO price of 7,800 won.