Korean listed firms projected to have finished Q2 better, bottoming out in Q1

이미지 확대
South Korean listed companies are projected to have weathered the COVID-19 storm by finishing the second quarter better than initially expected.

According to data compiled by Seoul-based financial data provider FnGuide on Thursday, combined operating profit of 185 companies publicly trading on Korea’s Kospi is estimated to have lost 22.9 percent on year in the quarter ended June, which would ease from a 31.2-percent fall in the first quarter.

Their estimated net profit in total dropped 10.8 percent in April-June period from a year ago, with the pace eased from the first quarter due to the fall in the Korean won value against the U.S. dollar, making Korea-made goods cheaper in overseas markets.

Outlook for secondary Kosdaq-listed firms also is improving, with 78 names projected to see a 10.5 percent on-year gain in operating profit in the April-June period. Their net profit is expected to have retreated 3.8 percent during the period.

“Although not in a V-shaped rebound, Korean companies are expected to report better-than-expected results in the second quarter versus the first quarter,” said Jung Yong-taek, an analyst at IBK Securities. 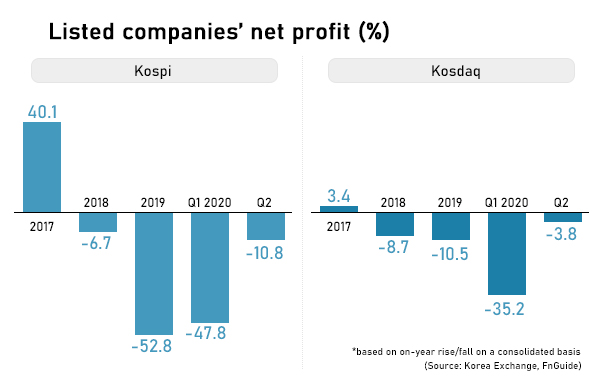 Hyundai Motor is forecast to report a 71.1 percent plunge in operating profit in the second quarter and Kia Motors equally damaging 72.4 percent and Hyundai Mobis 63.1 percent.

Posco is estimated to deliver a 70 percent decline in operating profit.

“The rebound will be more solid in third quarter,” said Lee Kyung-soo, an analyst at Meritz Securities.

Whether the local bourses will stay strong throughout the year also hinges on global economy,

Kospi-listed firms’ price to earnings ratio (PER), which measures the stock price against a company’s earnings per share, hit 12.6 times early this month, the highest of the year and near the peak of 13 times in the aftermath of the 2008 global financial crisis.