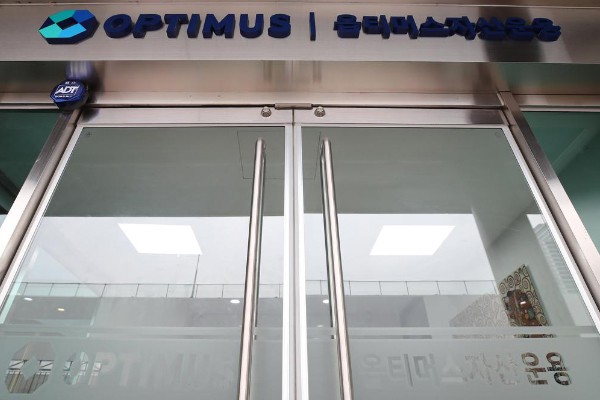 South Korean prosecutors on Thursday raided the office of Optimus Asset Management and 13 other locations amid ongoing probe into alleged financial fraud, prompting concerns over another wave of investor losses from large-scale withdrawal freeze.

According to multiple sources from the financial investment industry and prosecution on Thursday, Seoul Central District Prosecutor’s Office raided the office of Optimus Asset Management in Samseong-dong, southern Seoul, from late Wednesday and 13 other locations related to the probe.

About 10 investigators were sent to the locations to confiscate computer hard discs and documents. A law firm in the same building was also included in the raid list as well as firms whose Optimus Fund is estimated to have flowed into. The chief of the law firm is also registered as director of Optimus Asset Management.

The private fund operator collected hundreds of billions of won from investors telling them that they will be invested in bonds issued by public institutions. Optimus Asset Management is suspected of having forged documents to instead invest in loan sharks and insolvent enterprises.

NH Investment & Securities Co. and other brokerages that were responsible for Optimus Fund sales accused executives of Optimus Asset Management on Monday of fraud.

The troubled asset manager recently sent a maturity extension letter to the fund sellers including NH Investment & Securities recently of Optimus Creator Fund No. 27 and 28 with nearing maturity. The two funds – worth 22.5 billion won ($18.6 million) – have practically suspended redemption.

It is the third time for Optimus Asset Management to request maturity extension to the fund sellers, following its first for Fund No. 25 and 26 on June 17 and No. 15 and 16 on June 23. The asset manager has halted withdrawals worth 90 billion won so far. The amount is estimated to exceed 100 billion won when including open-type funds that have been requested to refrain withdrawal.

About 800 retail investors are estimated to have invested in Optimus funds via NH Investment & Securities, which sold 440.7 billion won or 82 percent of the total allocated funds.

The funds attracted 210 billion won worth of investment – an average of 260 million won per investor. The remaining 230 billion won has been invested by corporations excluding financial institutions.

The number of investors and amount is expected to grow when including retail investors from other brokerages such as Korea Investment & Securities.

There are concerns that damage could snowball as other Optimus funds with later maturity are also expected to suspend withdrawal.