이미지 확대
South Korean components and materials makers celebrated their triumph in the war with Japan export curbs that were initially feared to break up the Korean IT habitat when first imposed last summer, with their stock prices at peaks a year later.

SKC Co. a chemical material producer, hit a new 52-week high at 64,900 won ($54.07) on Tuesday before finishing up 0.8 percent from the previous session at 62,700 won. The company will begin mass production of high-end mask blanks in the second half of the year to enable self-sufficiency of its sister chipmaker SK Hynix Co. that had relied more than 90 percent on supplies from Japan for the material.

Mask blank is a core material in photomasking process in which a circuit pattern is drawn during the semiconductor lithography process.

Shares of Dongjin Semichem Co. also hit a fresh 52-week high of 24,850 on Tuesday. The company, a supplier to Samsung Electronics, is working on developing photoresist on its own. It became the first company to develop and manufacture argon fluoride (ArF) photoresist, a level before extreme ultraviolet photoresists (EUV). 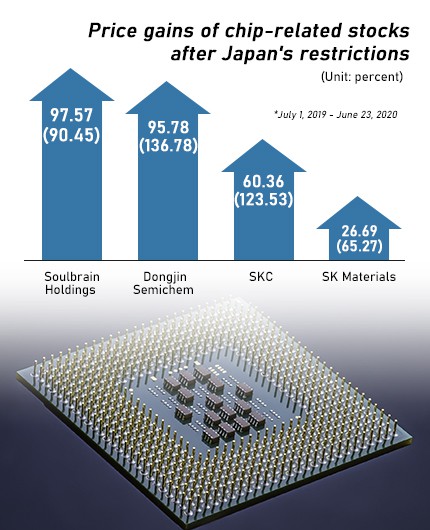 이미지 확대
SK Materials Co. shares reached an all-time high of 213,300 won on June 18, a day after the company announced to begin commercial production of high-purity etching gas, one of the three materials subject to Japan’s shipment restrictions along with photoresists and polyimide.

The South Korean government pledged a heavy investment and deregulation to wean the country off Japanese imports of components, materials and equipment after the Japanese government removed Korea from its list of countries enjoying preferential trade procedures.

Thanks to the full support, some companies have succeeded in self-supplying the materials. Soulbrain Holdings Co., which is working on self-supplying of hydrogen fluoride, saw its stock price soar 97.59 percent from July 1 when Tokyo announced the export curbs to June 23. Dongjin Semichem surged 95.78 percent, SKC 60.36 percent and SK Materials 26.69 percent over the same period.