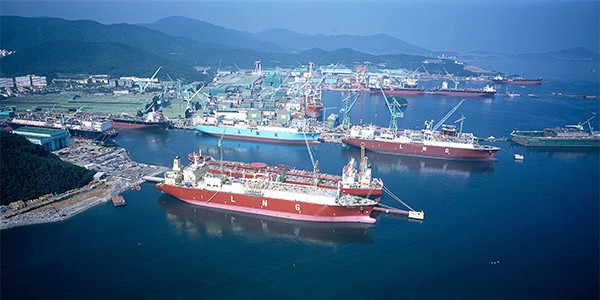 이미지 확대
The Korean stock exchange on Wednesday advised investors discretion when trading the preferred stock of Samsung Heavy Industries Co. that has hit the daily ceiling for 10 straight days without a strong reason.

Preferred shares of Samsung Heavy surged 29.84 percent from the previous session to close at 744,000 won ($611.74) on Wednesday. The shares are now suspended from trading due to the sudden jump, the third suspension this month. The price soared 13.7 times from the closing price of 54,500 won on June 1.

It broke the record of longest winning streak of nine trading days in a row set by now-delisted Korea Pacific No.02 Ship Investment Co. in March 2017.

The stock without voting right was helped by the 23 trillion won ($18.9 billion) worth mega deal on June 2 by Samsung won jointly with other majors Korea Shipbuilding & Offshore Engineering and Daewoo Shipbuilding & Marine Engineering and Samsung Heavy – from Qatar to supply maximum 100 units of liquefied natural gas (LNG) carriers.

But that alone cannot have driven the extraordinary run in the preferred stock whose price gain overwhelmed that of the underlying common stock, analysts say.

On June 1, its preferred cost traded 10 times higher than the common stock. The gap has widened to 115 times.

Analysts suspect some design behind the extraordinary movement in Samsung Heavy whose outstanding shares are relatively small – 114,000 shares capitalized at 85.4 billion won as of Wednesday. Small-cap stocks are easily swayed due to low liquidity.

The Market Oversight Committee of the Korea Exchange (KRX) issued an investor alert on Wednesday, saying that the top 20 gainers of preferred stocks have been showing 10 times faster price increase than common shares since the beginning of the month.