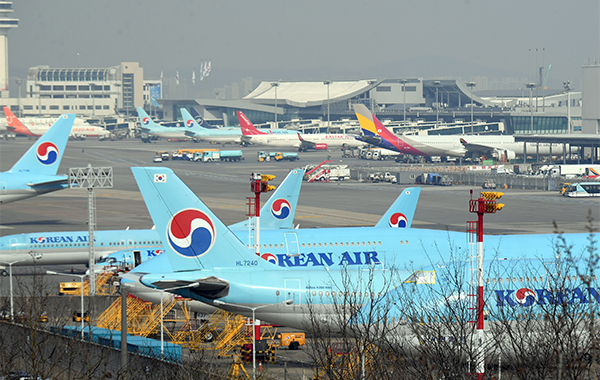 이미지 확대
State lenders are expected to gain the right to exchange bonds for shares in Korean Air Lines Co. within two years of the debt issue next month as part of conditions for the bailout of virus-battered industries.

The flag carrier will sell perpetual bonds next month after the government announces the guidelines for a 40-trillion won ($33 billion) corporate relief fund to be installed at Korea Development Bank to rescue key industries battered by the COVID-19 pandemic.

Airlines – mainly Korean Air and another full-service carrier Asiana Airlines Inc. – and shippers were decided as the first recipients for the rescue program that would be in the form of loans, purchase of assets and debt guarantees. The aid also must include purchase of bonds that can later be converted into shares tantamount to a 10 percent stake to ensure returns for the bailouts with tax money.

The perp, which does not have a fixed maturity and pays regular returns like a stock dividend, is expected to have a call feature allowing the issuer to pay back two years after issuance. Creditors will likely have the option to swap their bonds for stock before the two-year period.

이미지 확대
Korean Air and creditors are still in talks to decide on the specific swap date, sources with inside knowledge of the matter said. The timing would ultimately depend on Korean Air’s share price at the time of conversion, they added.

The swap would give creditors about a 10.8 percent stake in Korean Air, making them the No. 2 shareholder.

Currently the biggest shareholder is Hanjin KAL Corp., the holding entity of Hanjin Group, with a 29.96 percent share as of late March. The stake reaches 33.35 percent when including the shares of the Hanjin Group chairman and other owner family members. Korea’s National Pension Service owns 9.98 percent.

The creditor banks have reportedly asked Korean Air to submit a self-rescue plan to shore up its balance sheet by more than 1.5 trillion won.

The plan is likely to include a rights offering of 1 trillion won and a string of asset sales, including the idle land and building in Songhyeon-dong, Seoul and a stake in Wangsan Leisure Development, operator of Wangsan Marina resort in Incheon.

While talks of selling Korean Air’s in-flight catering and aircraft maintenance, repair and overhaul businesses have also been floated, the airline and creditors are said to be in favor of running them as subsidiaries by seeking outside investment.