Woori Financial bulks up regardless of virus challenges

이미지 확대
South Korea’s Woori Financial Group continues to bulk up regardless of the challenging environment under virus risk.

Woori Financial Group bumped up its equity capital by 3.6 trillion won ($2.9 billion) over a year through issuance of securities uncounted as debt, according to the Financial Supervisory Service (FSS). The company has sold hybrid and subordinated bonds to raise funds for M&As to build up its portfolio as a full-fledged holding structure.

The financial conglomerate is also seeking approval from the FSS on using the internal ratings-based approach for calculating risk-weighted assets. The financial authority already has completed due diligence on the Woori Financial Group. The group plans to file a formal application for the use after a final discussion with the risk management committee and board members this week.

The internal ratings-based approach allows banks to assess risk weights based on the internal rating of borrowers, which helps cut the weight of risk-weighted assets and raise the capital adequacy ratio calculated based on the Bank for International Settlements (BIS) guideline by as much as 2 percentage points. A financial company with a higher BIS has more room to beef up assets through loans and M&As.

Woori is the last among the country’s top four financial groups to adopt the internal ratings-based approach. KB Kookmin, Shinhan, and Hana that were transformed into a financial group holding system prior to Woori are already using the method.

Implementing the internal ratings-based approach is one of Woori Financial Group’s main objectives this year, said an industry source, adding that the financial group would seek the formal approval soon as due diligence was completed without any issues. 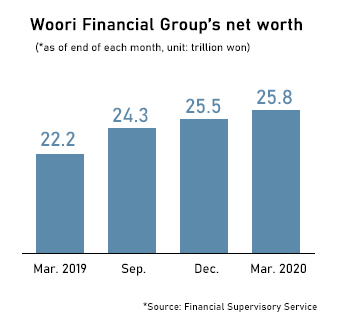 이미지 확대
Woori Financial Group’s BIS capital adequacy ratio is 11.89 percent as of the end of March, higher than the minimum ratio of 11.5 percent recommended by the FSS. Its risk-weighted assets are estimated at 217 trillion won, given that its capital totaled 25.8 trillion won at end-March. This means the group would be able to expand risk-weighted assets by 6 trillion won when the BIS ratio rises by 2 percentage points with the use of the internal ratings-based approach.

The financial group is expected to accelerate its M&A moves with the extra ammunition, especially to add securities firms.

Names of mid-sized securities companies including Kyobo and Yuanta have been floating in the market as Woori Financial Group’s top M&A candidates, said an industry expert.

On top of aggressive M&A, the group also is accelerating digital transformation. Sohn Tae-seung, chairman of Woori Financial Group, unveiled the company’s new vision of ‘Digital for Better Life’ last Friday. The growth of the contactless business driven by COVID-19 outbreaks has become a “next normal” (new standard), Sohn said, adding that “now is the golden time for digital innovation.”