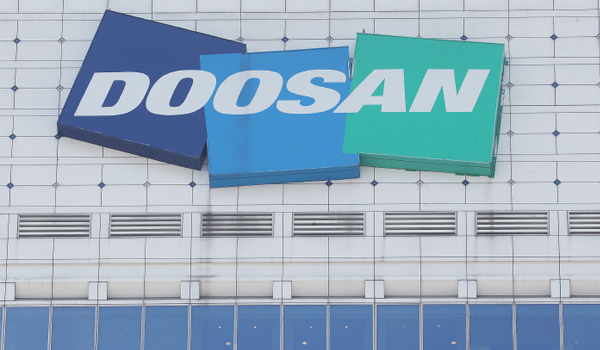 이미지 확대
South Korea’s Doosan Corp. won’t be paying out dividends to shareholders for fiscal first quarter as it must save as much cash possible to help out its flagship unit Doosan Heavy Industries as a condition from state emergency loan.

Doosan disclosed on Thursday that its operating profit on a consolidated basis in the first quarter reached 90.9 billion won, down 67.5 percent from the previous quarter and 74.4 percent from a year ago. Sales fell 13.4 percent on quarter and 1.2 percent on year to 4.43 trillion won. But it decided against sharing the meager profit, citing immediate strain and rising uncertainties.

It will resume dividend payouts in the upcoming quarters depending on conditions.

Doosan pledged at the end of last month to raise 3 trillion won by offering new shares, unloading assets and receiving aid from family owners to rescue the group’s core subsidiary Doosan Heavy Industries & Construction Co. The parent is under pressure for burden-sharing after state lenders offered 1.6 trillion won in emergency loans to the power equipment maker. Creditors would review further aid of around 800 billion won depending on the groupwide restructuring commitment.

The group is now in talks with Mastern Investment Management to sell Doosan Tower, its headquarters building located in fashion wholesale market of Dongdaemun in Seoul, for around 700 billion won. It is expected to raise about 100 billion won if the sale is completed after paying off debts and taxes.

It has also put up for sale Doosan Solus Co., the battery copper foil and OLED materials maker, and is considering divesting more businesses to secure cash.