이미지 확대
The global pandemic has shifted ranks in the top 10 valuable stocks in Korea, giving rise to mobile tech names Kakao and Naver at the expense of traditional manufacturers.

Kakao Corp, the operator of Korea’s top messenger app Kakao Talk whose stock price has been refreshing all-time highs has ascended to No. 9 in market capitalization on Thursday after it joined the top 10 rank on the previous day with cap of 18.9 trillion won ($15.4 billion) based on its stock’s closing price of 216,500 won. On Thursday, its market cap stretched to 19.6 trillion won to push out Hyundai Motor at 19.58 trillion won.

Naver Corp., the country’s top internet portal operator, has reclaimed No. 4 position in the market cap ranking this month. It slipped to sixth place in late March when the coronavirus outbreaks battered the local stock market hard.

The three companies ahead of Naver are memory chip giants Samsung Electronics and SK Hynix Inc., and biotech firm Samsung Biologics Co. Other big manufacturers with heavy reliance on export had been pushed out from the top list amid lingering concerns over the global economy that is taking a big hit from the pandemic. They include automotive parts supplier Hyundai Mobis Co. and steelmaker Posco, which descended to 13th and 15th, respectively.

Thanks to its strength in mobile labels, NCSoft also has been on a roll, extending its 52-week highs, getting ahead of Hyundai Mobis.

“Those cyclical stocks sensitive to the economy could be excluded from the upward momentum if the recovery in the economy is delayed,” said Kim Il-hyuk, an analyst at KB Securities. “But big tech stocks are anticipated to sustain strong growth.” The outlook for manufacturers with heavy reliance on export is grim because of the gloomy prediction that the world could be hit by a second wave of the coronavirus pandemic in autumn. But the second wave would become another growth opportunity for big tech companies that focus on the domestic market, Kim added. 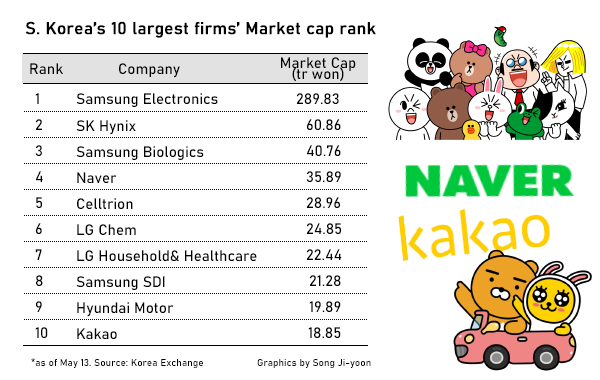 이미지 확대
Market experts see Korean IT stocks still have more room for growth. The price-to-earnings ratio (PE ratio), which measures a company’s current share price relative to its per-share earnings, still lags far behind global tech firms such as Facebook, Amazon, and Google. Amazon.com’s PE ratio for this year is estimated at 125 based on Tuesday’s closing price, according to Seoul-bases financial market tracker FnGuide. In comparison, the estimated PE ratio of Naver for this year stands at only 61.76 and Kakao 59.2.

Market experts forecast Kakao’s operating profit to reach 414.9 billion won this year, which would be a 100.6 percent jump from last year.

“Kakao has been growing rapidly on the back of brisk performance by messenger-linked platform businesses as well as paid-content services,” said Lee Seung-hoon, an IBK Investment & Securities researcher. The overseas transaction value of paid-content services grew 51 percent in the first quarter, said Lee, adding that he predicts the transaction value in Japan and Indonesia should exceed the figure from the domestic market in the second half of this year.

Naver is expected to continue reporting solid growth this year with its operating profit for full 2020 estimated at 978.2 billion won, up 37.8 percent on year. “Offline commerce markets are expected to contract due to the coronavirus-led economic slump, but online stores including those run by Naver will likely flourish,” said Lee Chang-young, a researcher of Yuanta Securities Korea.