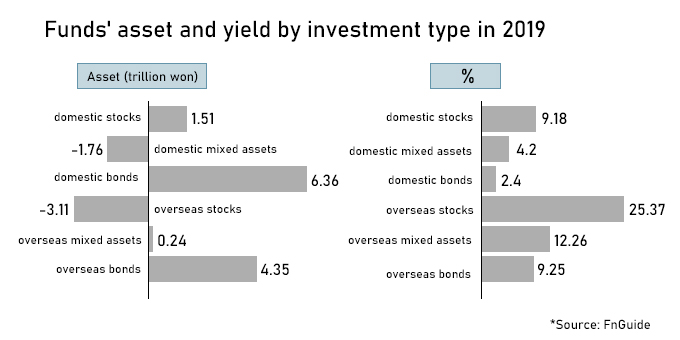 이미지 확대
Funds placing money in overseas securities delivered more than double returns than investments in Korean ones, underscoring the lackluster performance of the Korean bourse compared to its overseas peers.

Funds invested in foreign equities yielded 25.37 percent last year while those parked in local stocks delivered 9.18 percent, according to data released by Seoul-based market tracker FnGuide on Monday on funds with assets more than 1 billion won ($867,745).

“The Korean stock market began falling behind other markets in 2018 due to the double whammy of the U.S.-China trade war and weak IT industry,” said Lee Kyung-min, an analyst from Daishin Securities. “The market continued its sluggish performance in 2019 as a large portion of investments was drawn to bonds amid concerns on global economic slowdown and monetary easing trend.”

By Ahn Gap-sung and Choi Mira