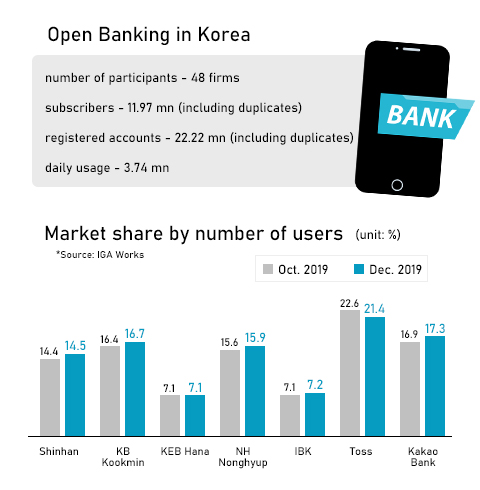 According to data from mobile big data platform provider IGA Works on Sunday, NH Nonghyup’s NH Smart Banking app accounted for 15.9 percent in December, up from 15.6 percent in October and 15.7 percent in November among the seven banking apps including Shinhan Bank’s SOL, KB Kookmin’s Star Banking, KEB Hana Bank’s Hana OneQ, IBK’s i-ONE Bank, Toss and Kakao Bank. KB Kookmin’s Star Banking also saw its market share by the number of monthly active users grow by 0.3 percentage point from 16.4 percent in October to 16.7 percent in December. The nation’s major commercial lender Woori Bank was excluded from the count because it launched a new banking app over the period.

The country began a test run of the open banking system on October 30 and officially launched it on December 18. While the number of users for most of the commercial lenders slightly increased, mobile payment app Toss saw its share in the market fall from 22.6 percent to 21.4 percent after banking service can be done in one app in Korea.

The total number of users of the seven banking apps gained 2.84 million, from 36.62 million in October, 38.65 million in November and 39.46 million in December.