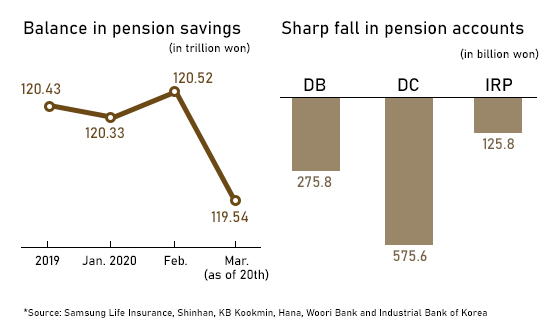 이미지 확대
Retirement pension savings have lost almost 1 trillion won ($827 million) this month in South Korea as more seek to cancel their policies despite penalties, with the coronavirus taking toll on personal economy after companies streamline or send employees on unpaid leave.

The sudden drop in pension balance underlines the virus strain on livelihood as pensions are regarded the last resort for salary-earners.

Even the IRP plans, in which an employee can manage fund for retirement on top of either DB or DC type of pension accounts, saw money outflow. Normally, money pulled out from DB and DC plans tend to flow in to the IRP accounts. But the outstanding balance of IRP accounts shed 125.8 billion won this month despite 851.4 billion won in loss from DB and DC pension accounts, indicating more people are in need of emergency funds.

By Lee Seung-hoon and Choi Mira