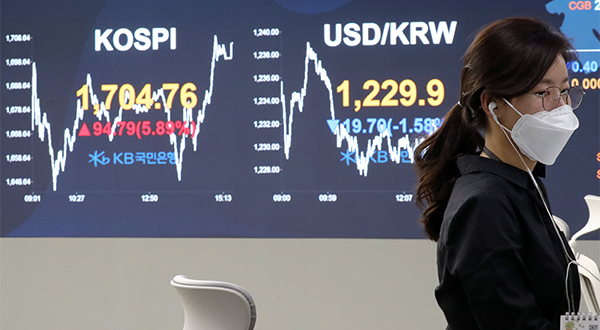 South Korean markets have extended rally for the second straight day Wednesday, lifted by overnight 11.4 percent jump in the Dow Jones Industrial Average on news of a $2 trillion stimulus package in the United States and multi-billion-dollar relief measures at home.

The benchmark Kospi gained 5.49 percent on Wednesday to end at 1,698.37. In intraday trading, it broke 1,700-threshold for the first time in six sessions.

The secondary Kosdaq stayed bullish throughout the day and closed the day up 5.01 percent at 504.48. It also is first return back above 500 in six sessions.

The Seoul government has also been trotting out multi-billion-dollar relief package and tax or regulatory exemptions during the emergency times for almost every day.

On Tuesday the Korean government announced 100 trillion won ($80 billion) funding for businesses of all scale.