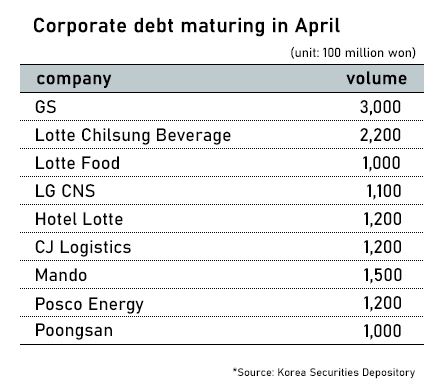 이미지 확대
The drought in the fund-raising market even has the investment grade Korean companies fretful of new issues.

Household Korean corporate names like SK, LG and GS cannot set the plans for new issues to refinance papers that mature in April.

Flag carrier Korean Air Lines Co.’s 600 billion won ($479 million) worth asset-backed securities (ABS) to be offered on March 30 will most likely be dumped on its underwriters led by Korea Development Bank as it drew less than 10 billion won..

SK Materials rated A+ rating, GS Holdings (AA0) and LG CNS (AA- rating) have yet to decide, although they have debt maturing next month.

SK Energy and HiteJinro were not able to proceed on their offering plans on AA+ and A0-rated bonds beyond naming underwriters.

Lotte Food will go ahead with its plan to conduct a book building session for its AA0-rated bonds on April 3. It fears poor demand could affect the next offering by Lotte Chilsung Beverage for AA0-rated debts.

The Korean debt market has soured and dried up amid foreign flight from emerging markets and assets amid worsening situation in the U.S. and Europe.