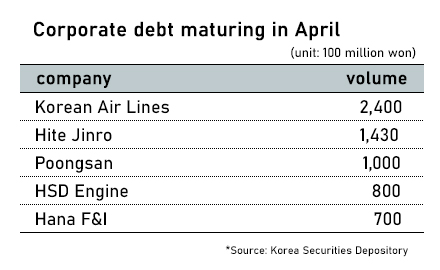 이미지 확대
Liquidity crisis is looming for the Korean Inc. with as much as 6.55 trillion won ($5.15 billion) in corporate bonds due by the end of April amid crippled fund-raising stock and debt markets.

According to the Korea Financial Investment Association, 6.55 trillion won out of 50.87 trillion won in the outstanding bonds due by the end of 2020 matures in April, the largest monthly amount in record.

Korean companies have been eager in debt issues to capitalize on the cheap and ample liquidity market. They inevitably would have to find other means to finance the debt obligation as the virus outbreak has wrecked the fund-raising sourcing from stock and bond market.
[ⓒ 매일경제 & mk.co.kr, 무단전재 및 재배포 금지]

By Kang Woo-seok and Lee Ha-yeon