Korea’s investment overseas jumped 21 percent from the previous year to reach $61.85 billion in 2019, the highest since data compiling began in 1980, the Ministry of Economy and Finance said on Friday.

The investment netted $49.33 billion in returns, up 18.4 percent from a year earlier.

Finance and insurance sector accounted for the bulk of the investment at 40.5 percent. Manufacturing came second at 29.7 percent, followed by real state at 11.2 percent, mining at 4.1 percent, and retail and wholesale at 3.3 percent.

Last year’s surge was driven by finance/insurance and real estate.

Investment in the finance and insurance sector shot up 45.4 percent to $25.04 billion as the record-low interest rate drove Korean public funds and asset management firms to profitable investment opportunities abroad.

Manufacturing investment was up 13.8 percent at $18.35 billion, largely due to the rise of mega mergers and the global outreach of Korean companies making electric vehicles, semiconductors and displays. 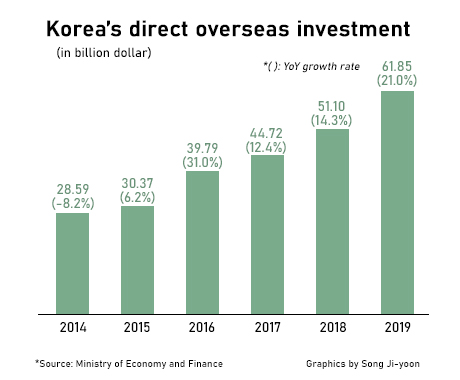 By country, the United States topped the list, accounting for 23.9 percent. The Cayman Islands, a British Overseas Territory in the Caribbean Sea, followed with 13.1 percent. China came third with 9.4 percent, trailed by Vietnam with 7.2 percent and Singapore with 4.9 percent.

Investment in the U.S. soared 32.4 percent to $14.77 billion, as Korean companies struck big M&A deals to expand their global footprint.

Investment in China totaled $5.8 billion, up 20.7 percent, with many Korean firms ramping up facility investment in electric cars and semiconductors.

Korea retrieved $2.58 billion from investment in the U.S., $2.03 billion from the Cayman Islands and $1.18 billion from Canada. Investment proceeds were the highest in finance and insurance at $5.15 billion, followed by mining at $1.97 billion and manufacturing at $1.73 billion.

In the three months ended December, finance and insurance accounted for 43.4 percent all investment, followed by manufacturing (22.7 percent), real estate (9.0 percent), logistics and storage (3.9 percent), and retail and wholesale (3.6 percent).