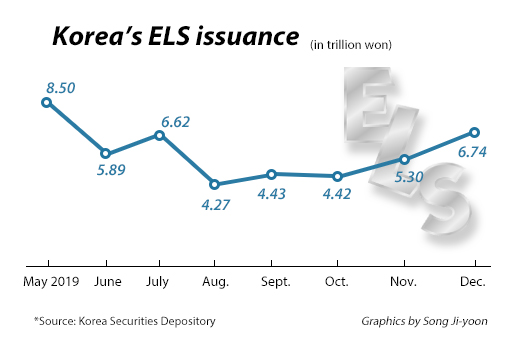 이미지 확대
Demand for equity-linked securities (ELS) in South Korea has been recovering after a scare from the volatile Hong Kong market and massive derivative losses linked to overseas assets.

ELS issuance that had reached 8.5 trillion won in May 2019 dropped sharply from August after investment assets in Germany and Hong Kong racked up massive losses in derivative-linked securities (DLS) and other high-risk products. ELS issuance shrank to 4.27 trillion won in August and 4.43 trillion won in September, nearly halved from six months ago.

If the prime asset price does not fall beyond a preset level, ELS investors can receive a payout in six months, which they tend to put back into another ELS product. But in September, only 4.43 trillion of the distributed 6.3 trillion won was reinvested as the DLS scare kept away investors.

Demand for ELS returned, however, due to a dearth of investment options as bank rates dropped to annual 1 percent levels.

“Investors seem to be turning back to index-backed ELS as it is seen as a fairly safe investment, given the fairly good records since early 2000,” said Jin Yang-gyu, head of the derivatives support team at Korea Financial Investment Association.

Firms are also drawing more investors by offering higher coupon rates for ELS to compensate for the increased market volatility. In late October, the expected return rate of most index-tracking ELS products was around 3 to 4 percent. Now, there are some offerings that give as much as 7 percent.

Samsung Securities this week launched an ELS that offers a 7.3 percent yield if the underlying asset does not fall beyond 55 percent. Mirae Asset Daewoo also released ELS with a 6.3 percent coupon at a 50 percent knock-in rate.

More ELS products are starting to replace Hong Kong’s HSCEI with the Shanghai Shenzhen CSI300 index amid investor jitters over the ongoing Hong Kong protests. HSCEI was the leading underlying ELS asset in December 2018, ahead of Dow Jones Industrial Average and S&P 500, but slipped to No. 2 last December. Meanwhile new ELS products combining CSI300, Dow and S&P 500 saw their issuance surge 50 billion won in the past month.

Mirae Asset Daewoo’s latest ELS offering, with a 6.3 percent expected return, is a mix of CSI300, Euro Stoxx 50 and S&P 500. As opposed to the volatile HSCEI, the CSI300 has been showing a steady upward trend since last August.