Stocks with a market capitalization of more than 1 trillion won were tallied at 194 as of late December 2019, adding just one from the same period a year ago, Korea Exchange said Wednesday.

The benchmark Kospi welcomed three new big caps for a total of 168, while the junior Kosdaq lost two to rest at 26. But when excluding the five mega initial public offerings last year, the number of big caps with more than 1 trillion won actually fell by four, according to the exchange. 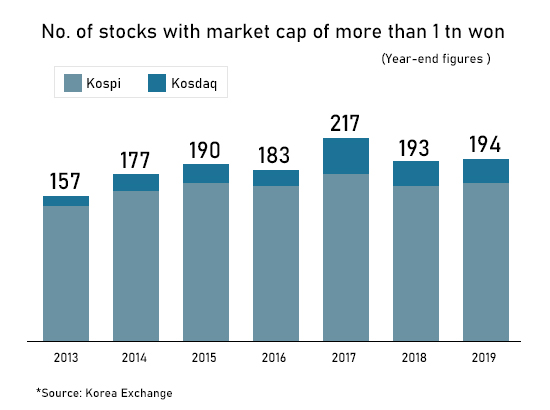 By comparison, the U.S. S&P 500 finished up 29.2 percent, Brazil 32.6 percent and Russia 45.3 percent. Japan’s Nikkei 225 also closed the year at a 29-year high, up 18.2 percent. Korea fared even worse than Hong Kong, whose Hang Seng index gained 9.7 percent even as violent anti-government protests paralyzed the city throughout the latter half of last year.

The benchmark Kospi, which had stayed subdued throughout 2019, saw an uptick in December that helped maintain its 1-trillion-won club. Stocks rallied as the U.S. reached a phase one trade deal with China, led by chip makers on expectations for a rebound in chip demand.

The secondary tech-heavy Kosdaq, however, shriveled as investor sentiment remained tepid amid multiple blows to the bio sector, notably Kolon Tissuegene’s gene osteoarthritis drug Invossa, whose permit was revoked due to allegations of mislabeling and false reporting of ingredients.