이미지 확대
Samsung Electronics Co. suggested it might have passed the worst in the chip down cycle as its fourth-quarter numbers showed signs of bottoming-out while finishing 2019 at a four-year low after bearing the bust from a chip boom.

The South Korean tech giant in a regulatory filing on Wednesday projected an operating profit of 7.1 trillion won ($6.07 billion) in the October-December period, down 8.7 percent from 7.78 trillion won in the third quarter.

Against a year ago, it was down 34 percent but nevertheless improving from 56 percent on-year fall in the third quarter against the best-ever year of 2018.

Sales reached 59 trillion won, off 4.8 percent from the previous quarter and down 0.5 from a year earlier.

On Wednesday, Samsung Electronics shares gained 1.79 percent to close at 56,800 won in Seoul.

Profit beat while sales disappointed expectations. In a Maeil Business Newspaper poll, the company was expected to rake in 6.4 trillion won in operating income on 61.2 trillion won in sales. 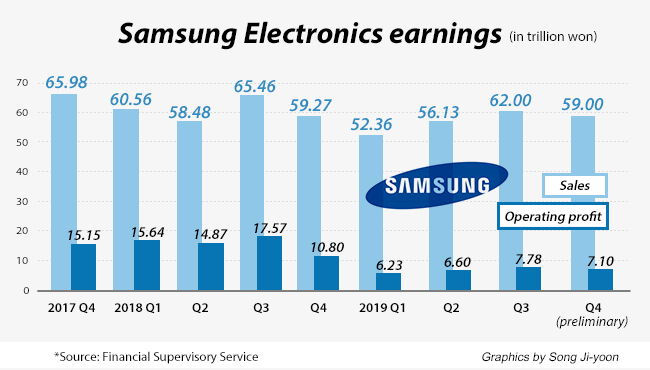 The semiconductor business, responsible for more than three-quarters of the company’s total earnings, has been showing signs of recovery amid revived global demand and easing in inventory levels.

The Galaxy Fold, the company’s first foldable phone released in September, also has been received well across the world with the first patch of pre-orders sold out on the first day of launch.

Samsung Electronics is due to release final and detailed results for the fourth quarter and full 2019 at the end of January.